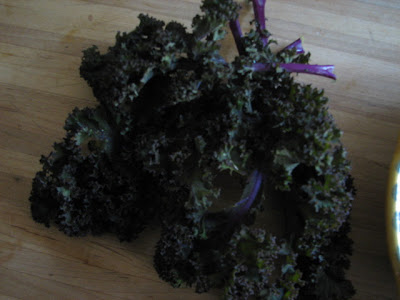 My sons' school is fortunate to have received an Edible Schoolyard grant and they spend some time each week in a beautiful garden, planting, harvesting and cooking vegetables and herbs. This week my youngest, Oliver, came home ecstatic about eating

You heard me right. Kale chips. Evidently, they had picked some of the leafy kale from the garden, separated the curly bits from the stems and baked it in a hot oven. They then drizzled a little olive oil and sea salt on it and ate it.

My son Oliver despises most vegetables and would never, ever eat kale if I had prepared it. Despite The Husband being a talented, amazing chef, and yours truly a former chef and damn good cook, this boy is very, very picky.

Except for KALE CHIPS.

I literally ran to the grocery store today and purchased some red leaf kale. When he came home from school, eager to make kale chips for me, I let him.

He separated the leaves from the stems and instructed me to put the stems in the compost.
He objected when I attempted to drizzle too much olive oil on the leaves in the bowl and insisted that it came afterward. The same with the salt. We put it on a half-sheet tray and popped it into a hot oven.

In about five minutes, we took the tray out. Each rather large leaf was shrunken to a crispy curled up bit of green crunch. 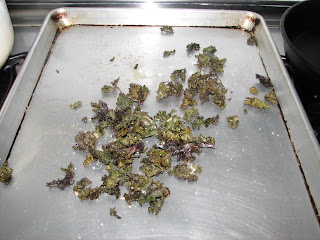 We sprinkled lots of sea salt on and put them in a bowl. Then we ate them. 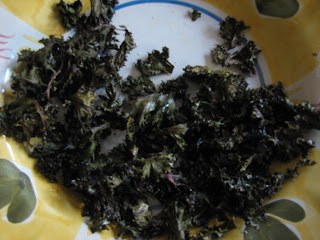 Imagine that. A bowlful of incredibly nutritious kale, eaten by an eight year old.