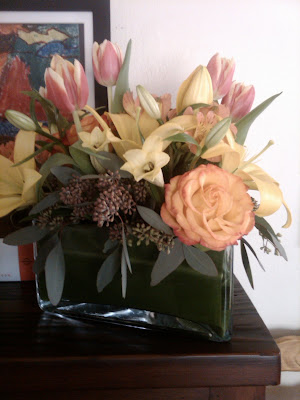 This is the arrangement that appeared on my front porch yesterday late morning. It came with a little envelope with my name on it. The card inside said, love from your secret admirer. I'd like to say that this made me happy, but it really didn't. The thing is I need to know WHO is my secret admirer and WHY they admire me. I don't think it's one of my friends because they give me so much, anyway, and they would surely tell me if they'd done such a thing. I don't think it's a man, or at least I HOPE it's not a man because if it is, I find that a bit creepy -- and like my good friend J said, The last thing you need right now is a boyfriend. That made me burst out laughing because it's so, so true (unless, of course it was George Clooney or maybe Alec Baldwin and they loved me, not in spite of, but because I am aging rapidly and am about five hundred pounds heavier than I was twenty years ago).


I know that I'm supposed to be pleasantly surprised by it and grateful and thankful and just be laid back and accept it with pleasure, but I can't. It's actually sort of driving me crazy.
Posted by Elizabeth at 2:32 PM