Who's Pouring the Tea 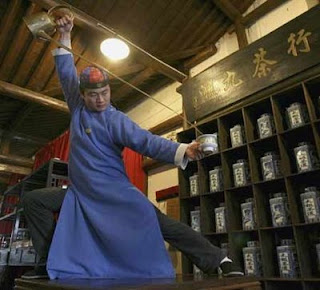 My blogger friend, Kimmie, suggested that I post a bit on the Koch brothers and their influence on the Tea Party. Here's an excerpt from a recent New Yorker article about them (and a link to the entire article below):

On May 17th, a black-tie audience at the Metropolitan Opera House applauded as a tall, jovial-looking billionaire took the stage. It was the seventieth annual spring gala of American Ballet Theatre, and David H. Koch was being celebrated for his generosity as a member of the board of trustees; he had recently donated $2.5 million toward the company’s upcoming season, and had given many millions before that. Koch received an award while flanked by two of the gala’s co-chairs, Blaine Trump, in a peach-colored gown, and Caroline Kennedy Schlossberg, in emerald green. Kennedy’s mother, Jacqueline Kennedy Onassis, had been a patron of the ballet and, coincidentally, the previous owner of a Fifth Avenue apartment that Koch had bought, in 1995, and then sold, eleven years later, for thirty-two million dollars, having found it too small


There's a lot written about the Tea Party members and those who sympathize with their platform. What I find interesting -- and repellent -- is that most of the members appear to be naive about just who is funding them and why. It sort of reminds me of the rise of the Christian Right during the Reagan years -- a group co-opted for purely political purposes. When I listen to those who are sympathetic to the tea partiers, I always wonder what they think is going to replace the "big government" that they so despise -- because it seems to me that big corporate interests are what rules the place -- money -- and those corporate interests are really only using the ideals of "liberty" "freedom" etc. to further their own agenda, which is profit and profit only.  My favorite example of this is all the folks crying about healthcare reform and socialized medicine -- the "government" somehow coming between you and your doctor. I'm living proof that what stands between me and my doctor has ALWAYS been my insurance company, and will always be my insurance company until something changes --  you're dreaming at worst and probably never been sick at best, if you think any decisions will be made purely between you and your doctor. My doctor is at the mercy of my insurance company, not only in how and what she is prescribing for my daughter but in the timing of receiving proper care. If insurance companies continue to work, unfettered by regulation, do you really think the free market is going to work healthcare out?  I'd be happy if we took the profit completely out of insurance companies -- and I'm still a believer in universal healthcare for everyone.

And yes, I'm perfectly aware that government, the government, is often a source of enormous dysfunction and ineptitude -- but I think it's profoundly cynical to write it off as a sort of behemoth incapable of change and great good.

If you want to read about who's pouring the tea, click HERE.
Posted by Elizabeth at 10:38 AM