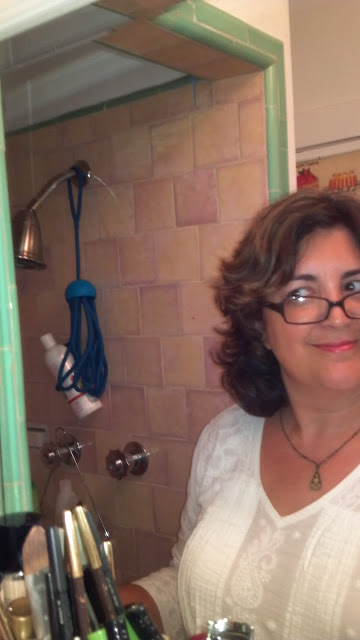 It's another Actor weekend, and last night's show was, once again, a blast. I told some friends that I'm having literal FUN when I do this show, and it might sound pathetic, but I can't remember the last time I had such a good time. Maybe it's because I'm hanging out with a bunch of women who I don't know and who don't know me -- it's a release of sorts. During the last six months, due to things unbloggable as well as the relentless grind of seizures, I've sort of morphed into my Italian grandmother who was known to walk around the house in her black house-dress with rolled-down support stockings, fingering her rosary beads and muttering pray that I die, pray that I die. I don't wear black all the time or stockings, and I sure don't finger rosary beads, but I've been on the edge of a constant whimper, if not a praying to die and I have the moles to prove it. With the show, I've lined up enough childcare to get away and have a glass of wine or my favorite beer each night with either the women in it or my beautiful friends who've come to support me. Last night, I sat in the car with my friend Jody for nearly an hour after the show talking and laughing about nearly everything under the sun, suffused with the warmth and horror of our shared experiences. Today I'll be running around with The Athletes (my sons), but later on I'll dress in my black shirt and pants, put on more makeup and drive to Burbank where I'll meet some friends for wine and dinner before getting back out on the stage and doing my reading. I do believe I've been replenished doing this performance, so perhaps on Monday, when it's all over, I'll stop whimpering and shout How lucky am I? And when I pluck the errant hair from my mole, I'll just be thankful that I have so many beauty marks.

I swear to you, there are divine things more beautiful than words can tell.
Walt Whitman
Posted by Elizabeth at 11:42 AM