How We Do It: Part XIX of a Series 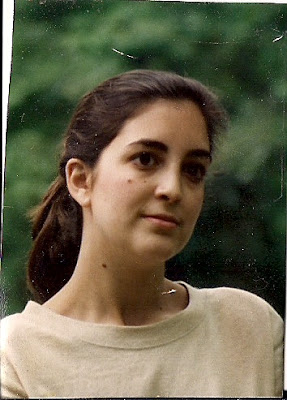 There was a moment last evening when I was eighteen years old, when I found it astonishing that one of my sons, spooning apple pie and ice-cream into his mouth, laughing with his brother and their friend from across the street, would ask me a question. Can we have more? he asked, not realizing that I was only eighteen years old, not a parent, not a mother. I had just changed Sophie's diaper, and was moving through the kitchen to the alley beside the house where the garbage cans lay. I had to put the diaper into a plastic bag and then dispose of it, and in that moment, moving through the kitchen with a diaper from an eighteen year old, I felt no older than my eighteen year old self, books on my hip, Balzac's Père Goriot, perhaps, or Introduction to Psychology, the crunch of leaves under my feet, deciding whether or not to pass through the Arboretum after dark on the way home to my dorm. My hair was impossibly shiny and my legs long and thin, a curly-haired boy with an enormous dimple would tutor me later that night in calculus and debate with his god on whether or not to take me into his bed, and a boy I would later marry climbed out of another girl's dorm room window with his guitar. No, that's enough, I answered, as I passed back through and grabbed some matches to light the candle in Sophie's room to mask the smell, and neither of the boys, nor their friend, nor Sophie who lay on the bed and looked through me had any idea that the person passing through was only eighteen years old, not a parent, not a mother at all.
Posted by Elizabeth at 7:45 AM

Email ThisBlogThis!Share to TwitterShare to FacebookShare to Pinterest
Labels: How We Do It