Spreading the LA Love In a Messy Way Obviously I didn't take the above photo of Los Angeles, but there have been plenty of days that I've looked east and seen that exact view and subsequently marveled over this piece of crowded land that I call home. I'll be honest and say that I almost never agree with my friends who really don't like living here. The complaints are always about the traffic, about the nasty entertainment industry, about the crowds and the many ugly neighborhoods, about the tackiness, about the culture and the plastic surgery and the bad schools and the excessive privilege. I'm moving back to the midwest, eventually, one friend always tells me. I would never want to grow old here. Friends who have also lived in New York say that there's no comparison, that they miss the grit and the darkness and the chic and effortlessly cool people, the walking and the honesty of that city. I, too, adore New York and feel as if the almost nine years that I lived there were among the greatest of my life. I don't think a day went by that I didn't think God, I love this place! and less so, but still frequently, God, I hate it here! I see my fair share of the grotesque here in Los Angeles -- even at my son's benign high school in the San Fernando Valley, you might rub elbows with Larry King and his eighth wife, Sylvester Stallone picking up his kid in a gold Bentley, and a veritable freak show of eighty year old men with trophy wives and teenage kids. But you'll also see the California boys and girls of your imagination, golden skinned water polo players with tousled, stiff chlorine-tinted blonde hair, towels around their waists, jumping into jeeps with surfboards on the top. I won't go into Los Angeles' weather, because you might up and leave, if you haven't already, but what might surprise you is that the culture here -- the sheer size of the city and the incredible diversity -- rivals that of any other city in the world, I think, and you only have to drive

to take advantage of it.

Last night, I had the pleasure of listening to my great friend, Tanya Ward Goodman, read from her new memoir, Leaving Tinkertown. She read a bit and then her brother, a tattoo artist and incredible musician with a gorgeous voice, sang songs that he'd written to accompany her. The performance was at a Masonic Lodge in the famous Hollywood Cemetery -- yes, a famous cemetery -- and it was filled with old people, hipsters, artists, attorneys, NPR folks, screen and television writers.  I met an attorney who works with families of kids with disabilities, and it turned out that she reads my blog daily and also knows of the organization that helps kids in the foster care system that I also work for!

Today, I finished a cake for a young girl's sixteenth birthday, and now I'm off to type for an hour at a performance art thingamajig going on at USC. I'll be pecking away at John Steinbeck's Grapes of Wrath, part of a typing pool, and as soon as I find the announcement about it, I'll post it. Maybe I'll even get a photo.

Here's the cake in process: 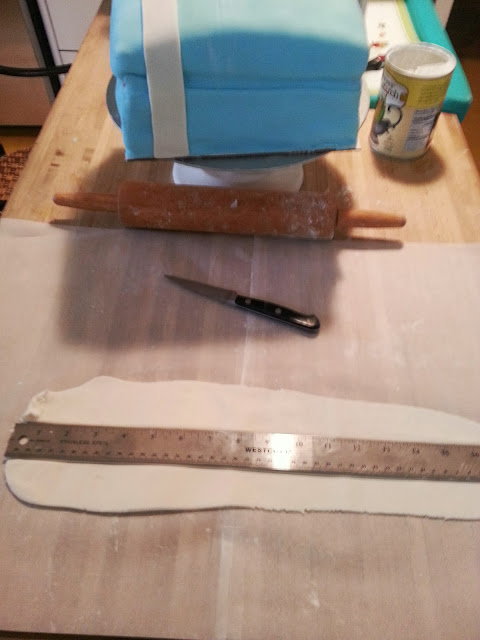 I don't mind getting old in Los Angeles, by the way, as long as I have these things to do, the sun still shines year round, and I'm able to make a living doing the things I love.
Posted by Elizabeth at 11:44 AM