Writing and Gifts from Old Friends and Sisters 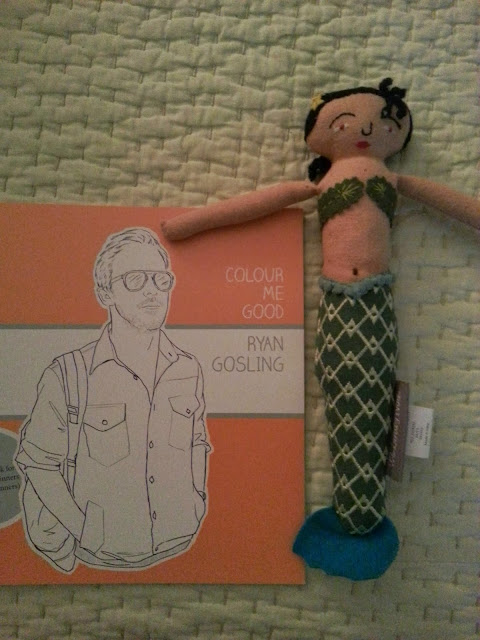 I started meeting once a week for a few hours with a group of writers. It's not a workshop group but, rather, a real writing group. We really write. At the beginning, we sit down and chit chat for a few minutes, catch each other up, briefly, on what's happening. Then one person tears up a few strips of paper and we each grab one or two. We write down phrases or words, anything that comes to mind and can be used as a prompt. Then someone picks up a piece of paper, opens it and reads it aloud. Then we write -- the first prompt is for five minutes, the second is for ten minutes, then it's fifteen and then back to five minutes. When the buzzer goes off, we stop typing or writing and read aloud what we've written. We don't comment, except to sigh or smile or laugh or draw our breaths in. Then we're on to the next. We follow in a specific order -- whoever opens the prompt and reads it aloud is the first to read aloud what she's written. Then we go counter-clockwise. It works. This is so good, you writers out there -- so good and so inspiring in the way that writers need to be inspired. You just start with something, anything, and then you write. I've always thought there's way too much discussion about writing in general -- about how difficult it is, about whether or not you're good enough, about the anxieties and insecurities of The Writer. Lately, I've noticed a whole lot of hullabaloo about writing for free on the internet, how resentful "writers" are when they're asked to write online and not get reimbursed. My opinion is that there haven't been too many writers in history that got paid enough money to support themselves and that if you're a writer, you'll just write, whenever and however you can. If you're getting paid and can support yourself, I envy you. If not, get a job, but don't stop writing.

Here are the prompts from a week or so ago:

This week, I got a spark of a short story from the prompt It Goes Like This. Think a man, tattoos, a bald head, the goods, the threat of a cult, Jesus freaks and the slippery slope of desire -- that's what I wrote about for five minutes.

When I got home this afternoon from the usual driving around the city, I had a pile of mail, including two mysterious packages. One was for Sophie, and when I opened it up I saw that it was from one of my oldest and dearest friends with whom I backpacked through Europe in the Let's Go Europe! days. Do you remember those? This beautiful, brilliant woman sent that mermaid to Sophie, and I'm taking it as a token of luck. Sophie did really well today, too, but who's noticing? The other gift was from my funny sister Melissa. She sent me a Ryan Gosling coloring book. She knows me all too well. Henry and Oliver took one look at the gifts and rolled their eyes. Are you really going to color that? Henry asked. I told him that I imagine it will be enormously relaxing to sit and color in Ryan Gosling's lines. You'd think I was stoned, but I'm not. I'm CBD'd excited.
Posted by Elizabeth at 6:32 PM