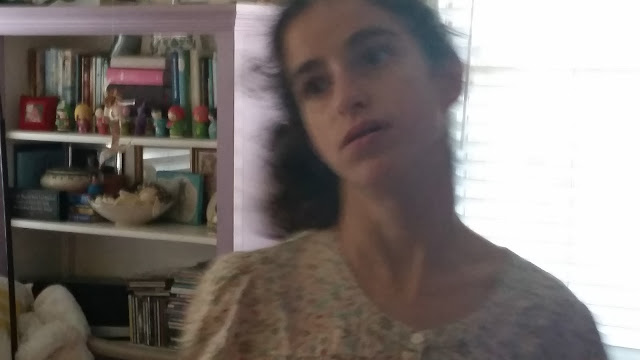 I stopped by my friend Craig's house today to check out his xeriscaping (that sounds sort of obscene or personal, but for those of you who live in areas of the world where it rains more than once every four years or so, it's what we do to cope with drought) and also had the pleasure of seeing his friend Tom. You might remember some years back when I wrote about Tom and his husband Ed whose 80th birthday party I had the privilege of attending and providing the cake. Tom and Ed have been together for well over forty years and listening to their stories about growing up gay in the thirties and forties of the last century, as well as being a couple in this one, were sobering, hilarious and fascinating. Both are the dearest and warmest of men, and it's such a privilege to run into either of them, even if was about 110 degrees outside. Today I had Sophie in the car, and when Tom walked up to it, I introduced him to Sophie. He said, Hi, Sophie! and I quickly told him that she wasn't able to talk but that she understood him. Tom said, just as quickly, Well, we have enough talkers on this earth, so that's just fine!

Then the skies opened up with rain, cleansed my soul, and plumped up my heart so that I jumped out of the car and pledged my eternal troth to Tom for being such a beautiful, inclusive man. Just kidding on the rain part. I would have planted a giant kiss on his lips if my own weren't so damn dry. I did admire Craig's xeriscaping, though, and shed a bit of rain on my own when I drove away. I've said it before, dear Reader: sometimes it IS the small things that can make or break you.


* Things People Say is a device I use throughout my book in progress, but they're generally stories of more outlandish things people say when faced with Sophie's disability. It's been my experience that the sort of comment that Tom made is a rare exception to the rule.
Posted by Elizabeth at 4:35 PM