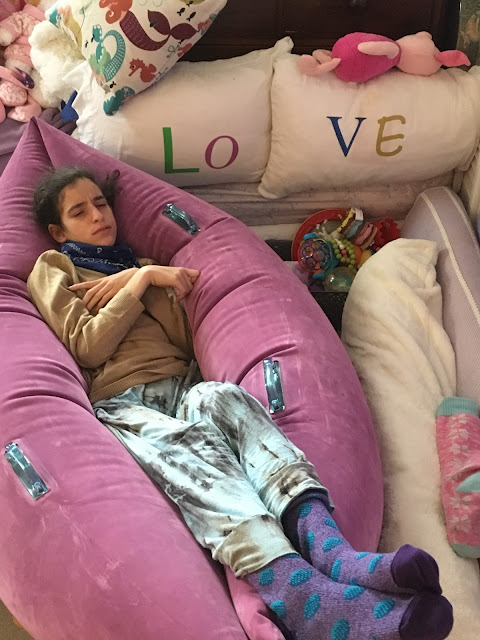 I take care of Sophie at home with the help of her father and a part-time babysitter because of a Medicaid waiver that she qualifies for given her cognitive and physical disabilities.She has been "deemed" a person "qualifying" of "institutional care." I am basically paid to take care of her at home, saving the government -- taxpayers -- a considerable amount of money to care for her in an institution. Those are the bald facts. We are, in a capitalist society, reduced always to a number. It saves you money to honor this social contract.

If the Affordable Care Act is repealed, this ability to care for Sophie will be severely compromised. Please read the following email that I've cut and pasted in full to learn more about what's going on for America's disabled and chronically ill.

If you can, lend your voices to the resistance.

I know many of you reading this blog are conservative voters who live in states that are gung-ho bent on destroying the Affordable Care Act. Perhaps you don't realize that despite its imperfections, it has also lent stability to millions of families like mine. Yes, we do struggle with rising premiums. We do struggle with the systematic denial of medical claims. We struggle with the ungodly amounts of money charged for pharmaceutical drugs. I am paid minimum wage to care for her at home, an amount far inferior to that which I might earn in a full-time career. I also struggle to care for Sophie without going insane, to tell you the truth, because it's just brutally hard to do what we do every single day for decades. Sophie's recent 5-day hospitalization cost more than $150,000. That would have bankrupted us if not for the Affordable Care Act and her Medicaid waiver, and I live in a grotesquely over-priced tiny bungalow in an economically rich neighborhood in Los Angeles. I have family that helps me to pay for relief, too. Unlike most people in similar circumstances, I have enough money to get therapy to help me to deal with the caregiving, with the constant stress of seizures, with the possibility of Sophie dying before me or dying afterward.

I'm telling you this to emphasize just how life-altering it was when the Affordable Care Act passed, even with all of its absurd complexity and kow-towing to the big insurance companies. The pre-existing conditions component, the lifetime maximum component, the preventive care component, the birth control component -- shall I go on? Our family was careening toward serious financial difficulties and running the risk of going uninsured before the Affordable Care Act was passed. Sure, we might have been "saved" by family, we might have taken the risk to have no insurance at all. I don't know. What I do know -- again -- is that I have plenty of resources, both financial and emotional and that many, if not most, of my fellow caregivers, their children and families, do not. So I'm advocating for them, really, far more than myself.

Even if none of this comes to pass, if the draconian machinations of Eddie Munster, Drumpf et al come to nothing, if the "replacement" even happens, the psychological distress that many of us are feeling right now is really difficult to convey without sounding whiny, maybe, or privileged. Then I remember what the hell we've all been doing, how much we fought for the ACA to begin with and how we have to do it all over again, even as we continue to advocate for and keep our children ALIVE.

If you can, lend your voices to the resistance.

ANCOR is the American Network of Community Organizations and Resources.
Posted by Elizabeth at 1:20 PM