Dispatch from the Left Coast 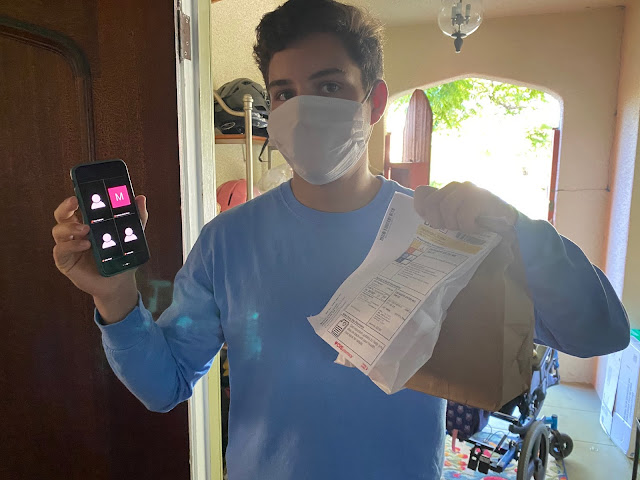 Do you know the art of erasure? I don't mean the art of disappearing or being invisible or making something or someone invisible, although that'd be awesome. I'm talking about taking a piece of writing -- a newspaper, the back of a cereal box, a page in a magazine, an advertisement -- and whiting out random words to create a poem. You should try it, especially if you're tired of or hate doing jigsaw puzzles. I hate doing jigsaw puzzles, and I'm busy enough teaching and taking care of my family, but I do love the art of erasure. Let's all do it and report back tomorrow with your creations.

I told Mary Moon that I feel anger and depression in equal measure but what rules me is dissociation and its close cousin, anesthetized cheerfulness, because what better coping mechanism do we have than the ability to let go and smile? I've perfected the art of dissociation after watching tens of thousands of grand mal seizures over the last quarter of a century. I'm not talking mindfulness here, although it has a place right alongside the dissociation. I believe both are distant cousins of the stick your fingers in your ears and hum method. Now that I'm thinking about it, though, I'm never cheerful. Optimistic, yes, but I can't stand cheerfulness. I really can't stand a Pollyanna. I prefer the darkly humorous and bitter people of the world who still manage to be incredibly kind. For instance, I'd rather be dying alongside someone who is sweet with a gallows sense of humor and dark view of mankind than someone who is sweet but claims to be a Pollyanna.

Who the hell is Pollyanna? I really, really, really can't stand the Pollyannas of the Pandemic. So much better to say, What the fuck? at the absurdity of waiting in line at the Costco for your giant jars of mayo than I actually LOVE the solitude and am enjoying making elaborate food for myself and then watching a corny chick flick! The queen of WTFs is my friend Sandra who has been posting her WTF lists on her Facebook page, recounting life in the Pandemic with a severely disabled kid. The thing is after the hilarity and dark humor of that, she tells us something for which she feels gratitude, and that gratitude is all the more beautiful for its WTF frame. She wrote come amazing commentary today about what it's like caring for a child with complex medical needs during the Pandemic. Turns out it's not that different than caring for him during typical times, something that we've been sort of Cassandraing about for decades. Read it here.


I don't know what I'm talking about anymore. I thought I might have caught the Covid on Sunday. I just felt OFF. Evidently, I don't have it, though, at least not yet, because I felt better on Monday and Tuesday after dosing myself up with elderberry syrup, Yin Chao and prayer. Just kidding on the prayer. I lay in bed for hours in the darkest hours before dawn making elaborate plans for when I got sick. I won't regale you with these as it'd be about as interesting as me recounting a dream. I did a lot of mindful panicking in my tiny little mother mind™ before I conceded to the powers of the earlier-mentioned dissociation and concluded the whole session with a dark nod toward imminent death and the cessation of present troubles. Last night I woke in the middle of the night with the most intense headache I think I've ever had. I stumbled to the bathroom and shook out two Advil (even though my mind balked because I've heard that Tylenol is better than Advil for the Covid) in the dark and then stumbled back to my bed where I lay for hours, wondering whether this was a precursor to Covid or a stroke, but I eventually fell asleep and woke embarrassed in the light at my earlier histrionics.

Reader, what's up with you? If you're wondering, that photo is Oliver multi-tasking. He went to CVS to get Sophie's medications while attending "class."
Posted by Elizabeth at 5:34 PM