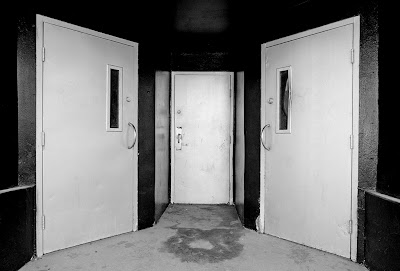 I've often joked, over the last fifteen years, that making decisions about Sophie's medical care is similar to picking which door to open. All the doors are generally closed and imposing, only a few have windows and all are heavy and mysterious. Often, we've opened the door and walked through only to turn around and walk back out. Other times we've opened the door a crack and then quickly slammed it closed. Very rarely, we've been shoved through a door and then beaten our way back out.

There's never been a door that we've walked through, at least in the medical world, that had some sort of light behind it. Never.

Despite my request to only answer my post about Sophie's diagnosis with a HOLY SHIT!, many of you have asked questions and made assumptions and that's all right. Really, I don't mind. I thought I'd update you a bit by answering a few of those questions.


1.  Aren't you relieved that you know the cause of her seizures?


Actually, it's not that simple. Sophie's MRI showed a cortical dysplasia in the left temporal lobe and hippocampus. These are generally present in utero and are a common cause of intractable epilepsy, but there is such a thing as a post-natal cortical dysplasia that is a result of intractable epilepsy. Which one does Sophie have? I don't know, yet.

2.  Are there treatments for it?


At this point, no. Brain surgery might have been an option if it had been seen earlier, but that's a whole other can of worms. I'm personally grateful NOT to have to make that decision because while I know surgery has been miraculous for some, I know an awful lot of kids who've had it and it hasn't helped -- or made things worse. My feelings about epilepsy brain surgery are way too complex for a blog, anyway, and those of you who see those tv specials about kids who have half their brains removed and are walking! talking! living a normal life! need to really stop and think about what taking a portion out of anyone's brain really means and how difficult that decision must be for a parent (as well as surreal). Oh, another thing -- yes, there's a brain surgeon out there would jump at the chance to operate on Sophie's brain, but there are also doctors who implant eight embryos into women's uteruses, too. If this sounds harsh, humor me.


I'm conflicted, actually. Getting an answer so late in the game actually underscores my already dubious feelings toward the whole western medical world, particularly neurology. It's a dark field, people, perhaps the darkest. I mean, the hippocampus is called that because it looks like a seahorse: 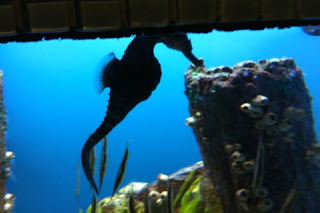 One of the most difficult adjustments -- no, let's call it a life-altering happening -- was learning that those whom I had previously held in great respect, who were worthy of my awe and definitely those to whom I deferred -- were actually in as dark an area as me. Medicine, I think, is less science and more art and with a child like Sophie it's a dart game, a crap shoot, three heavy doors. The near existential feeling of being alone, of feeling uncared for, is substantiated by this "discovery." It's nothing personal or ill-intended, I realize -- it's just the way it's been for me.

4. Has your view of vaccinations changed?


No. I've never been against vaccinations. I just know that Sophie's first vaccinations caused huge problems, and I don't think there's a single person who would rule out unequivocally the possibility that those vaccinations were a catalyst for her seizures. Pertussis was contra-indicated after she was diagnosed because it was a live-cell vaccine in 1995 when she received her first dose. The vaccine is safer today. I believe with all my heart that vaccines can be and will be safer but that they are not as safe as they could be at present. I would never NOT vaccinate my children and then not support their health through nutrition and integrative medicine. I have worked my ass off to do so with all three of my children. The only thing I despise about the vaccine debate is the simplicity with which it is conducted on both sides, and that simplicity is what makes me nauseous quite literally.

5. How are you now that the news has sunk in?


I'm still shocked about the news and feel depleted and sad. I think that's because it's sort of a replay of when Sophie was first diagnosed, so many years ago. I was so much younger and naive and she was just a tiny 12-pound baby. It makes me sad to think of that time, to think of myself at that time and all that was lost and the road ahead and just the damn difficulty of it. Somehow, this second diagnosis day has plunged me back there, and while I know I won't feel this way forever or even for very long, I feel extremely sad.


She's not doing very well at all right now. She has many, many large tonic seizures (those are the grand mal type) every day. It's wondrous that she gets up and walks, eats, occasionally smiles and watches the trees sway in the southern California breeze. We are continuing the IVIG treatments but I am nearly prostrate with confusion and grief about her seizures. I believe that only people who have this specific experience can truly understand the horror of seizures, the relentlessness of them and the FACT that I've been doing this, watching them, for over fifteen years. There is one new drug that we might try, but I have little heart and hope when it comes to meds. I don't know what else to tell you.

One of my dearest friends, Cara, who suffers from a very debilitating illness, said the most comforting thing to me the other day when I told her about the results of the MRI. She told me that this news made her realize that Sophie has always been who she is. And who she is is an incredibly beautiful, graceful, spiritual being who affects everyone she meets. Perhaps that is what I'm grappling with -- that essence of her that defies knowledge and treatment and fixing.

That makes sense to me and gives me peace.

Thank you for your concern, your comments, your questions, your prayers, your candles and your Holy Shits. I am so, so grateful for all of you.

Posted by Elizabeth at 2:32 PM