Another Great Night in Los Angeles 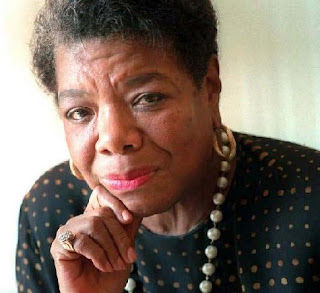 I've written before about the writer's word series that I indulge in every year. I buy one ticket -- it's my season ticket -- and I sit on the third row, right in the center and look right up into the eyes of some of my favorite writers and poets.

Tonight, after a frustrating day that I'll write about some other time, I was transformed by Maya Angelou. This ticket was originally for February, but the date was changed when Ms. Angelou was awarded the Presidential Medal of Freedom by Obama. When the curtain went up on the stage, she was revealed, dressed in a long black jersey dress and strands of gold chains. She stood for a moment as the sold-out crowd at Royce Hall at UCLA clapped and cheered wildly, and then as we quietened, she sat down and began to sing -- sing the words from one of her poems in a deep, rich, almost manly voice. She sang what I can only describe as the refrain of  Our Grandmothers: I shall not be moved.

She lay, skin down in the moist dirt,
the canebrake rustling
with the whispers of leaves, and
loud longing of hounds and
the ransack of hunters crackling the near
branches.


She muttered, lifting her head a nod toward
freedom,
I shall not, I shall not be moved.


She sat in a wing chair on the stage the entire time, next to a little table that held a vase of pink snapdragons and white calla lilies, a beautiful wooden box with a shiny, gold clasp, and a hard-backed copy of one of her collections of poetry. She told many stories in her deep rich voice and recited many poems, some her own and some of those she loves best (Paul Dunbar, Nikki Giovanni, Mary Evans, Edna St. Vincent Millay, William Shakespeare).  She spoke about her own history, weaving her birth, her parents abandonment of her and her brother, her ten years living with her beloved grandmother, her rape as a young child and all that followed. Always, she came back and sang the refrain: I shall not, I shall not be moved.


It made me shiver.


She gathered her babies,
their tears slick as oil on black faces,
their young eyes canvassing mornings of madness.
Momma, is Master going to sell you
from us tomorrow?
Yes.
Unless you keep walking more
and talking less.
Yes.
Unless the keeper of our lives
releases me from all commandments.
Yes.
And your lives,
never mine to live,
will be executed upon the killing floor of
innocents.
Unless you match my heart and words,
saying with me,
I shall not be moved.


In Virginia tobacco fields,
leaning into the curve
of Steinway
pianos, along Arkansas roads,
in the red hills of Georgia,
into the palms of her chained hands, she
cried against calamity,
You have tried to destroy me
and though I perish daily,
I shall not be moved.


She connected all peoples, of all races and cultures. She claimed to be black and white and gay and straight and male and female and beautiful and plain and fat and thin, and she laughed while she told us these things and we all laughed back and then stopped to hear her sing I shall not be moved.


Her universe, often
summarized into one black body
falling finally from the tree to her feet,
made her cry each time into a new voice.
All my past hastens to defeat,
and strangers claim the glory of my love,
Iniquity has bound me to his bed.
yet, I must not be moved.

She spoke of the necessity of poetry, in particular -- to go to, for laughter and for tears, for sustenance. She told many stories about poetry pulling people from despair.  She pulled her presidential medal of freedom out of the pretty little box and showed it to us, not bragging but exclaiming. I shall not be moved.


She heard the names,
swirling ribbons in the wind of history:
nigger, nigger bitch, heifer,
mammy, property, creature, ape, baboon,
whore, hot tail, thing, it.
She said, But my description cannot
fit your tongue, for
I have a certain way of being in this world,
and I shall not, I shall not be moved.

She cracked a number of hilarious jokes that I can't recall right now. I do remember, though, that while reciting a list of immigrants and their respective countries, those who had come to the shores of America over the years from all over the world, she said something about the Buddhas and the Pests. That was funny. She linked us all.

No angel stretched protecting wings
above the heads of her children,
fluttering and urging the winds of reason
into the confusions of their lives.
They sprouted like young weeds,
but she could not shield their growth
from the grinding blades of ignorance, nor
shape them into symbolic topiaries.
She sent them away,
underground, overland, in coaches and
shoeless.
When you learn, teach.
When you get, give.
As for me,
I shall not be moved.

I laughed a lot and cried a little. I was moved, powerfully. I never felt like a "white woman" listening to a "black poet." I felt connected to those around me by our collective held breath.

She stood in midocean, seeking dry land.
She searched God's face.
Assured,
she placed her fire of service
on the altar, and though
clothed in the finery of faith,
when she appeared at the temple door,
no sign welcomed
Black Grandmother, Enter here.
Into the crashing sound,
into wickedness, she cried,
No one, no, nor no one million
ones dare deny me God, I go forth
along, and stand as ten thousand.
The Divine upon my right
impels me to pull forever
at the latch on Freedom's gate.
The Holy Spirit upon my left leads my
feet without ceasing into the camp of the
righteous and into the tents of the free.
These momma faces, lemon-yellow, plum-
purple,
honey-brown, have grimaced and twisted
down a pyramid for years.
She is Sheba the Sojourner,
Harriet and Zora,
Mary Bethune and Angela,
Annie to Zenobia.
She stands
before the abortion clinic,
confounded by the lack of choices.
In the Welfare line,
reduced to the pity of handouts.
Ordained in the pulpit, shielded
by the mysteries.
In the operating room,
husbanding life.
In the choir loft,
holding God in her throat.
On lonely street corners,
hawking her body.
In the classroom, loving the
children to understanding.
Centered on the world's stage,
she sings to her loves and beloveds,
to her foes and detractors:
However I am perceived and deceived,
however my ignorance and conceits,
lay aside your fears that I will be undone,
for I shall not be moved.

For I shall not be moved.

**The poem quoted is Our Grandmothers. When I stood up after this brilliant performance, I was alone (the trouble with single tickets) and felt a bit lonely that I had no one to share that moment with. Thank you, because now I think I have shared it -- with you!
Posted by Elizabeth at 7:00 AM