Update from the School of Revolution 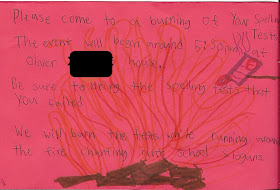 Homeschooling began again in earnest today, and I thought ya'll would like an update on it and perhaps a snapshot, of sorts, of a morning. Over the last couple of weeks, Oliver has begun going out in the morning for a run and is working toward doing a 5K. He claims to run for a bit, stop and do jumping jacks and then for a bit and then more jumping jacks, etc.  I guess we can call this P.E., and while he does that I scurry around and do whatever it is I need to do in the morning. When he gets back, he makes himself a smoothie (peanut butter, milk, frozen banana and chocolate chips) and starts in on a computer reading program that was suggested to me as being good for dyslexia. He works on that for about 45 minutes to an hour by himself with me checking in every so often. After that, we worked together on a few things. The first was writing and grammar, all laid out in an interesting way in a workbook that was recommended to me by another homeschooler. Today, we learned about declarative, exclamatory and interrogative sentences. We wrote captions to comics and finished with a mock invitation to an event. This is called an "Imagination Stretcher," and Oliver chose to create a Burning of Your Spelling Tests invitation that you can see in this post.

So awesome -- I think -- that the rest of our morning that included a chapter on property rights in a very cool economics book, with a corollary discussion of Plato, Aristotle and Thomas Aquinas, followed by some review of the early North American settlers, was sort of overshadowed.

I learned today (or had forgotten) that the Pilgrims were actually two groups of people -- the Saints and the Strangers. The Saints were the original Separatists who had fled to Holland when King James began to tax them for using church space (they had separated from The Church of England because they had given up on the church every properly "purifying" itself from the excesses of the Catholic Church). When the children of the original Separatists began to assimilate into the Dutch culture, the elders were alarmed and decided to move their people to North America, but before they could do so, they returned to England to get the money and were forced to take on many more people. These extra people were called the Strangers. I just love that.

And all of this.

This afternoon, Oliver will go to Mathnasium for an hour because I refuse to teach it. I love that, too.

The Story of the World (History for the Classical Child)
Volume 3: Early Modern Times

Wordsmith Apprentice
by Janie B. Cheaney