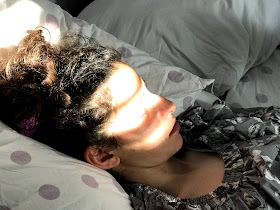 So, tomorrow (Friday) marks the end of the second week of Sophie's recovery from her wisdom teeth extraction, and it appears that she's turned the corner. My poor baby girl suffered so much for so many days, but she's rallied and is eating again, has stopped having so many seizures (sometimes more than six, seven a day), can walk a few steps, has great eye contact and has even smiled. Knock three times.

I am relieved. I am so very grateful.

I'm also a wreck, the proverbial ashes after the Phoenix has risen. I've probably made that cliched analogy 5,432,897 times in the last twenty or so years, but it's the damn truth. I am wasted. Sleep-deprived. Out of my gourd stressed. One of the highlights of the fortnight (how often do you hear the word fortnight these days?) was the early morning that I staggered into her room to check on her and came upon a scene straight out of a horror movie. There were ANTS marching along her windowsill and across her bed and onto her face and into her ears and mouth and nose and braids. I'm not kidding you, Reader. Hundreds of ants. She was asleep and stayed asleep (I imagine she was not just asleep but post-ictal after having a silent seizure that I wasn't aware of), even as I frantically brushed the ants off of her, stripped her, lifted her up and lay her on the floor, ants crawling all over me, then, as I ran to the kitchen, grabbed a bottle of Windex with vinegar and started spraying down the windowsill and the bed and then stripping the bed and rolling everything up and bringing it to the washer and then running to the hall closet, grabbing the vacuum cleaner, climbing onto the bed and vacuuming everything. Sophie slept on the floor the entire time. It was about 5:30 am, and while I thought about waking The Brothers, I decided not to -- they'd probably only stopped playing a few hours before that dreadful game that every kid is playing, and let's just say that there are some things, some entirely insane moments of this caregiver life, that I want to spare them from remembering. When I was done vacuuming, I picked up Sophie from the floor (yes, I picked her up in a kind of squat that you see those Olympians do with barbells) and carried her to my bed. Then she started to have a seizure, and I effectively dissociated in a similar fashion in my mind as I'm doing here on the screen.

I can't remember if it was that night/early morning or another one that I called my friend Sandra in New York and wailed, but she helped me as did you and you and you (you know who you are). This community is everything. Thank you.

I can't go without mentioning the absolute shitshow happening at the border of our country. Would that we've reached a turning point today when the AG actually quoted from the Bible to justify the practice of separating children from their parents and That Sanders Woman reiterated the Bible to justify the fuckery. I'm not quoting any more Bible verses here except to repeat what my son Henry yelled when he heard about it. You could probably pick out any Bible verse and twist it enough to say that Jeff Sessions is a POS. Amen, son.

It should now be the turning point where we take to the streets and storm the WalMart where those boys are housed, help them out and throw the POSPOTUS and his Mafioso into it with all their supporters and enablers to live in to the end of their days.

And where are the GIRLS?

Honestly, Reader, can you even make up a story more Amerikkkan than illegal brown children being housed in a former Walmart -- a shitty megaMcstore, an altar to money and exploitation that has destroyed communities, sells mostly processed food and crap to the suckers who shop there because it's cheap and whose owners are revered for their wealth? That the Powers That Be are claiming God has ordained this -- well -- my god.

Call your representatives and demand that this stops NOW.