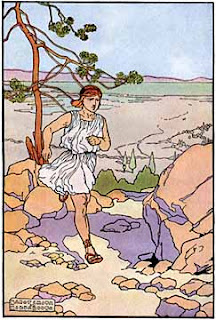 This post risks being incredibly cliche, but I'm having a go at it anyway. Henry and I watched the women's Olympic marathon tonight, and while he prattled on, asking questions that I distractedly answered, Sophie had a seizure. She was in her room, already in bed, so we raced down the hall and into her room. She was in full tonic posture and groaning loudly. Henry stood in the shadow of the doorway while I kneeled on the bed over her. It lasted for well over one minute, perhaps even more than two minutes and she uncharacteristically groaned throughout. Henry asked, "Is she all right?" and then when I told him, yes, he went back to the marathon. When the seizure ended, I tried to make Sophie comfortable and then lay down next to her for a few minutes. Those are the minutes where my own adrenaline subsides and I say prayers or cry or just lie there and think dark thoughts.

Here's the cliche: it's a fucking marathon, these seizures, and Sophie is the runner.

When I joined Henry in the living room, the Romanian woman Constantina was still plugging along, well ahead of the pack of runners behind her. It looked to me like she was running at a constant breakneck speed and at times her arms were sort of flailing and I felt almost disgusted by how unnatural it all is, right? It looks so painful, at least for some of the women, and Constantina didn't look happy. But she did stop flailing when she saw the stadium and when she ran inside and the crowd roared, I wanted to cry. Henry just said, "Wow," and we sat there and watched her run her victory lap.
Posted by Elizabeth at 12:04 AM