THROWING MY HAT IN 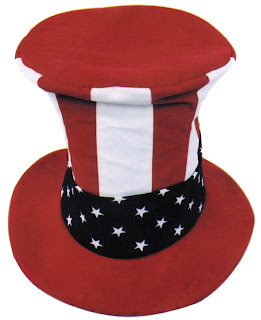 My friend Moira of dreamdogsart told me that I should throw my hat into the Vice-Presidential race, and the more I thought about it, the more I realized that yes, I should, I'd be a really good Vice-President and have a whole list of qualifications that pertain to the job. So, here they are and I hope that you'll vote for me:

I was born on August 27th, 1963, and the following day Martin Luther King made his "I Have a Dream" speech. Even though he is black and I am white, he spoke in Washington, D.C., and I was born in a small hospital in Southampton, New York, such was my karma that the speech has literally colored my whole life. I was born with a dream , and I know that I could be a voice for millions of disaffected people of all colors.

I spent the first five years of my life shuttling back and forth with my parents from the resort town of Southampton, NY and the resort town of Palm Beach, FL. Despite the fact that my father and mother are the hard-working son and daughter of immigrants from Italy and Syria, they lived a glamorous life in those early days and again, by osmosis, I have a unique understanding of what it's like to be surrounded by the rich but actually be poor. I realize this comes in handy in an increasingly connected and disconnected world (the Internet makes everything complicated, you know?). In fact, this is my campaign slogan:

FRIENDS WITH AND SURROUNDED BY THE RICH, I AM POOR, LIKE YOU!

I am a diplomat by nature but not averse to conflict. When our little family moved to New Jersey in the late seventies, I attended public school with many other white children from my neighborhood but also had the advantage of exposure to the many children of color who were bussed into our neighborhood school. In third grade, I got into a fight with Bonita Covington, a young black girl who wanted a monkey sticker that I refused to trade. The fight took place in the schoolyard and when Bonita seized my stocking cap and threw it into a muddy puddle and punched me in the face while a throng of people stood round us chanting, "Fight, fight, fight," well, I was saved by the playground monitor. I agreed to go to the principal's office and listened politely to his lecture on getting along at school. I even shook hands with Bonita, despite feeling an incredible sense of injustice that resonates today, almost thirty years later. But I still have the monkey sticker.

I tell you these anecdotes to illustrate not just my strong character credentials but to emphasize that my experiences are worthy. They are real. I am like you. You can identify with me. I don't want to belabor the point and will highlight, below, the rest of the reasons why I am uniquely qualified to serve as your Vice-President:

1. I am smart but not too-smart. I am basically the smartest of the dumb and the dumbest of the smart. My old high-school pals told me that I was able to really "hang" with those in "dumb math," without making them feel dumb when I actually took honors math.

2. I have worn glasses since I was six years old which, I believe, is a requirement for smart people.

3. I have a very mixed background of Syrian, Italian and, most importantly, white Scotch-English heritage. My maternal grandmother is from the great state of Mississippi and while I don't look a whit like it, we're actually descended from George Ross, the signer of the Declaration of Independence.

5. I spent several years as a writer in a small regional brokerage firm in Nashville, TN and know my way around the stock market. It's big and crazy, but we seem to have survived the stock crash of the 80s all right, so I'm feeling positive about everything economic right now. It all comes round in the end.

6. I guess you could say that I'm a liberal, but my parents are staunch conservatives and I get along just fine with them.

7. I have a daughter with special needs.

8. I have a daughter with special needs.

9. I have a daughter with special needs.

10. I have two sons, aged seven and ten. The younger wants to be a mailman or a clown when he grows up, and the older wants to be a racecar driver. We're simple people and have instilled good values in our boys.

11. I live in Los Angeles and enjoy watching a couple of television programs, just like you.

12. I have a special needs daughter.

15. I'm a stay-at-home mom, but I currently hold several positions and have been successful at all of them, except maybe the last because it hasn't started yet. These are: Parent Chair for a national organisation that aims to help improve the quality of healthcare for children, founder of a national non-profit foundation that raises money for pediatric epilepsy research and outreach, Publicity Chair for a non-profit foundation, Room Parent for my son who is in the fourth grade (and spent two years on a school parent board as Head Room Parent), Den mother for my second-grade son's Wolf troop (this is the one that I am only now beginning).

In other words, I'M ORGANISED.

Organised, smart but not too smart, friends with the rich but not rich myself and the mother of a special needs child.