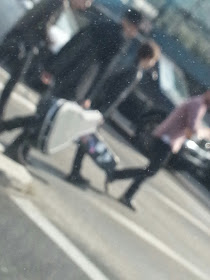 At the Little Santa Monica-Wilshire Blvd intersection in Beverly Hills, I spotted four men with guitar cases and slyly took their photo and imagined them to be the Beatles, circa 1969, Abbey Road.

I dreamt last night that I was supposed to get on a flight to Morocco but couldn't find my ticket. I wandered down stainless steel hallways and knew that the person to call was my father who came to get me. I keep dreaming about planes and trips that I just miss, airports and hotels and frustrated efforts to get somewhere.

I felt bitter when I read about some spokesperson for the NFL, stating that they would consider "allowing" pro football players to smoke pot if it helped with their concussions and brain injuries. Evidently, football players smoke a lot of pot for pain. I imagine the hurdles to help these men will be minimal -- as compared to the legion of families who are working their asses off to get medical marijuana for their children suffering from devastating uncontrolled epilepsy. Does anyone else see the insanity of a sport/industry that gives people debilitating neurological problems yet commands fanatical attention and earns billions of dollars? I hate the American Football Sports Machine and the reek of money and profit. The smell of bullshit is bitter, bitter, bitter.

I read another anti-anti-vaccination diatribe today on Facebook and jumped in the fray despite the futility of it all. This is what I said in response to a person's comment about the "reckless behavior of those who don't vaccinate:"

Yes, those of us who have a child with a severe refractory seizure disorder because of vaccines live every day recklessly as we change their diapers for twenty years, pick them up from the floor where they lie, seizing, give them medications, scientifically "sound" that cause hideous side effects and mull over questions on whether it would be better for our child to die before us or after -- and then have to read the pablum that the mainstream media presents, pitting crazies against crazies with literally no nuance or attempt to understand the very real fears of many of us. My question to you is whether you believe my daughter's life is a worthy sacrifice for the "greater public good" -- I will pass no judgement if you believe this to be so, but I sure as hell pass judgement on those who never once entertain that THIS is what many of us have to grapple with as we make decisions in our families. And I'd add that the acknowledgement of that would go very far in persuading people to vaccinate -- much further than the incendiary language you use or the facile calling up of superficial goofball celebrities.

Now, don't get me wrong. I am decidedly NOT against vaccinations. I just think people should stop before they call people immoral or reckless and think about how AFRAID many of us are -- AFRAID for good reason. We are afraid and not crazy. How about talking to the legions of parents who allow their young children to play a sport that could very well cause their brains to be jarred against their skulls and, over time, alter the exquisite and beautifully wrought neurons of which they're made.


Where else do you read about The Beatles, Beverly Hills, the NFL, vaccinations and marijuana and have it all tied up in a neat little package?
Elizabeth at 10:08 PM
Share