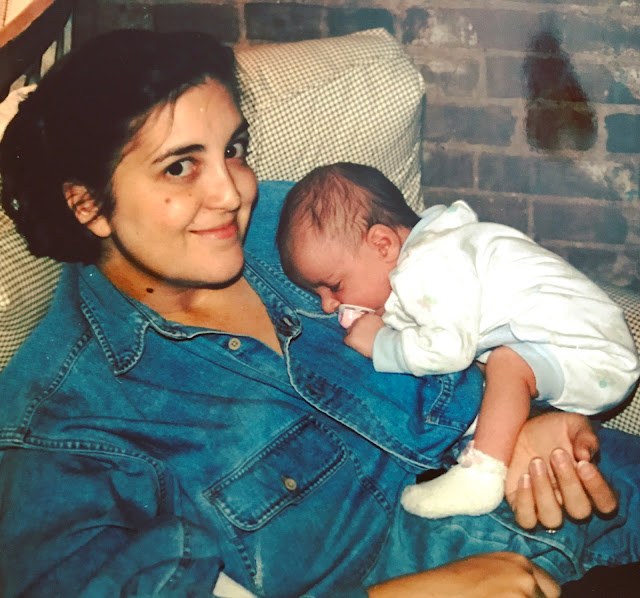 So, this is a picture of me and newborn Sophie in March of 1995. I found it this morning when I was rummaging around in a drawer on my desk. It was precisely twenty-two years ago and less than three months from the day that life as I knew it would begin to unravel. As a friend put it: BTSHTF.*

When I see these old photos of The Time Before, I can't help but peer at them in a sort of writerly self-absorbed searching for the meaning of the whole clusterfu**k that we call life kind of way. I'm constantly wrestling with identity --what it is, exactly, that makes us who we were, who we are, what makes us human. I can remember who that young woman in the picture was if I think hard enough, and lately my life's strange and beautiful circumstances have reminded me of her, too --  but I believe we hold some kind of essence that is constant even in inconstancy, if that makes sense. I will go out on the proverbial limb here to include Sophie as well. That baby I'm holding was very different from the baby that was diagnosed with infantile spasms a couple of months later. I remember thinking in the months that followed that I'd been given a new baby, so violent were the expectations up-ended. Bless my sweet heart. I don't remember when I realized that Sophie's essence was intact, but today, twenty-two years later, I'm thinking about how identity is fluid, and it leaks out of the eyes and down the face from some kind of deep dark well.

I toured a facility for developmentally disabled adults this afternoon. The place was a sort of Bleak House and fulfilled my expectations for such a place, even if I entered it with the usual dumb hope whose source shares room with fathomless sorrow. I was going to write a quasi-bitter post about the sheer physical ugliness of the facility, how many adults were crammed into tiny rooms with no windows or decoration or flooring or soft surfaces, how we determined that Sophie's toileting needs could not be accommodated as there was no changing table in the restroom, and how when I voiced my objections to that, I was reminded that perhaps the Senior Care facility down the road was a better fit for my daughter. How old are the people in that facility? I asked. Around 45-80 years, but we have some younger ones, the director told me with a straight face, even as she took the machete hanging on the stucco wall and slashed my chest. Reader, these people were kind and industrious, I swear.

Identity, you remember, can be fluid.

At worst, the seventeen minutes I spent at the facility was a kind of Monty Python scene of absurdity with tinges of Ingmar Bergman and the careening humanity of Fellini. Know that places like this are where WE AS A CULTURE HAVE CONSIGNED OUR FELLOW HUMANS WITH DEVELOPMENTAL DISABILITIES, at least those who aren't from wealthy families (and I mean wealthy, as in rich as shit). These are the places that WE AS A CULTURE LEAVE TO POLITICIANS TO FUND, TO HACK AWAY AND MARGINALIZE. At best, visiting Bleak House was the sort of experience that has helped to define me as a person and a writer, however self-absorbed.

I lifted my head from the steering wheel after crying there for a moment or two and realized that it'd be interesting to take a photo twenty-two years ATSHTF.** If identity is fluid, it is here, leaking out of the eyes and down the face from some kind of deep dark well. 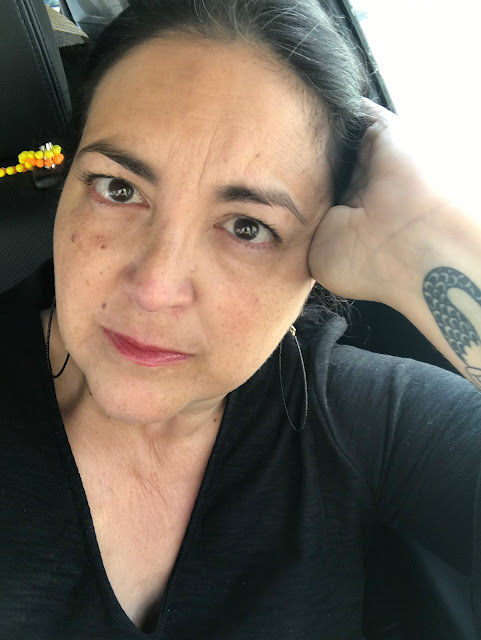 Identity is fluid. Essence is intact.