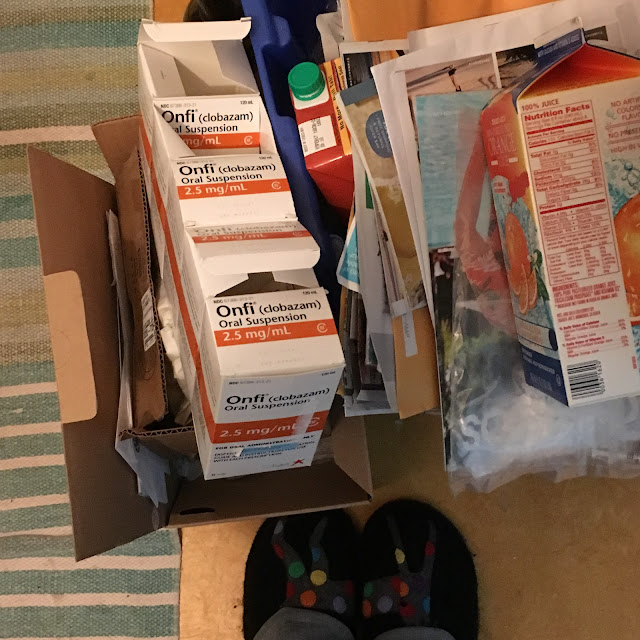 Did I really defend my anger over the pharmaceutical industry a month or so ago when that pharmaceutical rep commented on my blog? What was I thinking trying to reason with that person? This morning I read the Los Angeles Times' report on the Oxycontin clusterfuck. It's titled 'You want a description of hell?' Oxycontin's 12-Hour Problem. Read it and come on back and rage on with me.

Despite all the clusterfuckery going on in the Presidential race, the particular topic of the pharmaceutical industry's stranglehold on -- let's just say EVERYTHING -- is of way more interest to me. It might be a stretch, but it's why I don't trust -- let's just say EVERYTHING -- germane to Big Pharma. That would include some of my favorite non-profits, like The Epilepsy Foundation, that get huge perks from pharmaceutical companies. That would include the CDC and vaccination policies, so if you're of the mind that I'm immoral, anti-science, stupid or otherwise cray-cray, do me a favor and fly, my pretties, fly!

Remember my rant against the government and marijuana policy the other day?

Remember the nice physician I talked to at my friend's house over spring vacation? He objected to my bitter comment that neurologists who continue to prescribe multiple anti-epileptic drugs to their patients with refractory epilepsy are unethical.

Why is marijuana not rescheduled, yet? Is it because the big pharmaceutical companies are working their asses off to make a synthetic version of the medicine and have so influenced lawmakers on both sides of the proverbial aisle that nothing will happen until they've discredited the grassroots movement enough to take total control?

Why am I still having to persuade family members of the efficacy of medical marijuana in lieu of powerful and addictive painkillers?

Why did I rip open the last box of Onfi in the supply I bought months ago, order a refill and get the runaround, once again, from the insurance company? Oh, I forgot. Onfi is a powerful and addictive narcotic that's not good for much other than sedation and temporary alleviation of seizures. And there are lots of people addicted to it and its even more formidable auntie, Klonopin, so the government has wizened up and is becoming stricter about how much you get and how often. I think at some point it was touted for restless legs, and sleeplessness and anxiety, but god forbid you should take it for over eight years like Sophie has, because then you're stuck with it maybe FOREVER.

Let me tell you this: Sophie is on the new strain of WEED, and it's working. She goes weeks with only one or two seizures. What do you think of that? Anecdotal? I work my ass off getting input from her medical marijuana doctor, my fellow mothers and fathers in the cannabis community, and my own reading to tinker with the strain and the dosage and the timing, and sometimes we find a sweet spot and it's glorious. Letting go of all the conventional stuff feels glorious, too. I'm no longer donating money to foundations that are underwritten by pharmaceutical companies. I'm not serving on any more boards of these companies, no matter how much "good" they do. I'm not going to vote for any politicians who receive large sums of money from pharmaceutical companies. That might mean everyone, so I'll write in a candidate instead. Like I said, I'm going rogue. I wish that I could let go of the Onfi and the Vimpat that Sophie's still on, but unfortunately, if I did so, she'd probably die. That's right. The withdrawal would probably kill her. So I'll continue to rip open the boxes and draw up the drugs in hopefully tinier and tinier amounts until she's off them completely.

Then, I'm getting stoned myself.

Posted by Elizabeth at 3:45 PM