Waiting for the Dishwasher to Drain 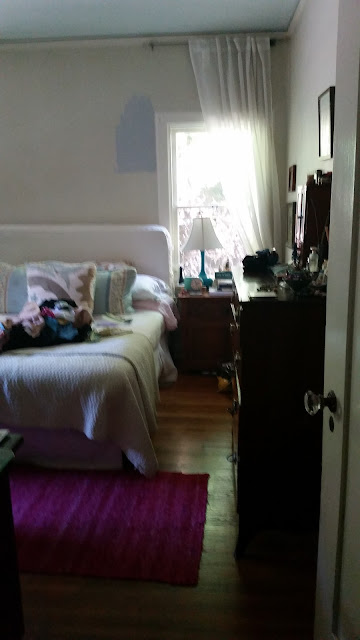 I'm waiting in my bedroom. There's a man from Armenia in my kitchen, crouched down by my dishwasher. He's waiting for the Quick cycle to complete so that he can determine why it's not draining.  I only mention that he's Armenian because he looked at me strangely when I asked whether he was checking out the Dodgers schedule, a large magnet attached to the refrigerator door and at his eye level. In my country, we don't watch baseball, he said, I love soccer. I asked him what country although I had already guessed by his accent, but unlike The Donald, I veer toward the politically correct and didn't want to profile him in any way. Capische? my father would say. That's you, I'm asking, not the dishwasher repairman. I'm fascinated these days by the collision of language and culture, a collision that seems inevitable for all but those who've taken vows of silence. It seems like there's always someone or something to offend, whether you're being completely rude and calling someone a fucker, let's say, or mincing your words while wearing the yoke of politically correct intentions.  There's rape culture and microaggression and ableism and racism and sexism and what means yes and what means no, good intentions and bad ones, consciousness and unconsciousness and subconsciousness. And then there's the law and the interpretation of the law and the protection of the law and the rebuffing of the law.  It's a weird sort of tyranny, I think, but I haven't thought deeply enough about it to make sense here. Did you participate in the Armenian 100 year celebration? I asked him, looking for something to share. Oliver and I had walked to the end of our street during the parade and watched the tens of thousands of Armenians walking toward the Turkish embassy. The dishwasher repairman said, Yes, but my grandfather had waited all of his life for it and was waiting to go back and visit his home that he'd fled. He died right before. I told him that I was sorry to hear that, to hear that his wait had been for nought, and the dishwasher repairman shook his head and replied that at least they could acknowledge this waiting, this crime. Then we both looked at the dishwasher, like it was waiting for us. I came back here, to my bedroom, to wait. Capische?
Posted by Elizabeth at 2:50 PM