A series of movie clips:

So, I can't go into it here, Reader, but I'm being grifted. It's outrageous and frustrating and hurtful emotionally and financially. There's nothing I can do about it, and while I wish I could tell you more, I don't want to enable The Grifter. I've gotten good legal advice about The Grifter and have accepted it. Accepted that I'm being grifted and can do nothing about it, that is.


My tiny little mother mind™ learned from a friend about a concept called status inconsistency which is fascinating, especially when I look on it as a kind of personality disorder. It would explain The Grifter, for sure.


In real life, I am thinking of that old Pedro Almodovar movie Women on the Verge of a Nervous Breakdown. Have you seen it?


In more cheerful news, both my dudes are home for a short time before leaving to go to their respective campuses where they will be studying virtually or doing some sort of hybrid thing during The Great Pandemic. They are really the greatest sons in the universe. And Sophie is doing pretty well. We had a scare with a person close to us who came down with The Covid and had to be hospitalized, but she is recovering, and we all tested negative (this time, for what it's worth). Sophie had an EEG the other day, and I had to badger The Nice Neurologist for the results, but I'm happy to report that it's the same old, messed-up EEG that it's always been with no ESES. 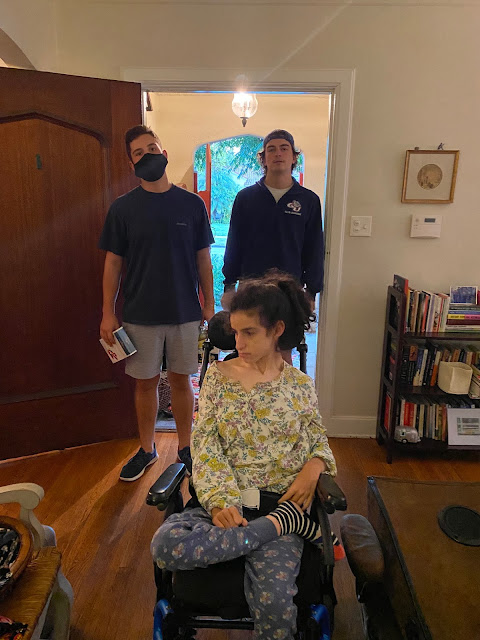 We have a lot to be thankful for, including the recent appointment to Vice Presidential-candidate, Kamala Harris. I think she's exciting, strong, interesting, brilliant and presidential. At this point, Terrible America could use even a kindergartner to replace the present POSPOTUS, so we're on the way out if not up with Harris.

What are ya'll doing?

Posted by Elizabeth at 2:22 PM