The boys and I went to a small Halloween party tonight at my good friend's house. She had bought some pumpkins for the kids to carve and made some chili and cheese quesadillas for us all to eat. On the way over, Henry decided that his planned costume, a bank robber, was "boring." He decided that he wanted to dress like a girl, instead. We debated whether he'd wear a dress or a skirt and decided a dress. Then we went back and forth on hair style and decided no wig, just barettes in the hair he has. I can't wait to see his wide, freckled boy face with a girly hairdo on Friday.

Oliver, on the other hand, has known for weeks that he wants to be a SWAT officer. He's always had a propensity for law enforcement and the military, a fascination and at the same time unbridled fear of the police. In fact, he has always been a challenging kid, sassy when he shouldn't be, outrageous, sometimes, in defiance, but whenever I threatened "juvy jail," he would literally scream (for real) in protest. He doesn't like to be teased about juvy jail. In my worst mom moments I imagine him in jail at some point, telling a friend he had this wild fear of juvenile jail as a small child; do you think it was a premonition?

But he picked out his costume from some cheesy catalog and it came, wrapped in plastic a few weeks ago. Even though I warned him that he should wait until Halloween, he opened it and tried it on. He strapped on the belt that holds the guns, the billy stick and walkie-talkie and walked around the house and up and down the sidewalk. I have to admit that he looked menacing -- a cross between a sweet on-the-short-side seven year old in too-small penny loafers (they were the only black shoes he had) and a member of the Village People (remember that band?). He wore his costume tonight to the party and carved a pretty great pumpkin. 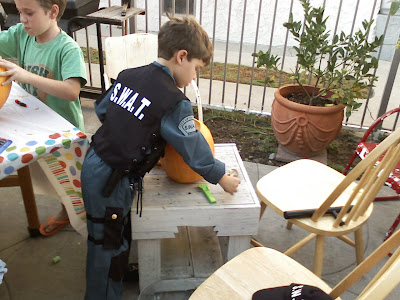 The food was delicious and the company great. When I got home, I put Sophie to bed and started reading on the computer. I was interrupted suddenly, though, by the sound of her having a seizure. The gasp and groan that becomes a yell. By the time I got to her bed, it had already subsided so I just wiped her face and sat with her for a few minutes.

This is ordinary too. Or is it?

And then a friend sent me a copy of a poem.

The Patience of Ordinary Things
by Pat Schneider

It is a kind of love, is it not?
How the cup holds the tea,
How the chair stands sturdy and foursquare,
How the floor receives the bottoms of shoes
Or toes. How soles of feet know
Where they're supposed to be.
I've been thinking about the patience
Of ordinary things, how clothes
Wait respectfully in closets
And soap dries quietly in the dish,
And towels drink the wet
From the skin of the back.
And the lovely repetition of stairs.
And what is more generous than a window?
Posted by Elizabeth at 10:41 PM