The Strange World of the Blog

is so strange that I don't even have a photo that would have anything to do with this post. Maybe this would do: 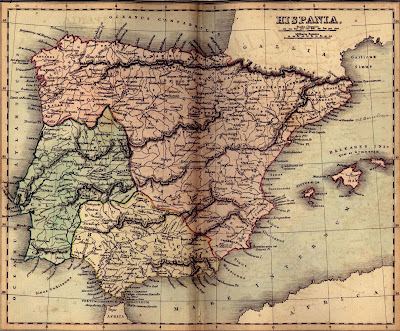 A map of Ancient Spain

So, about a month ago, a lovely person named Isabel contacted me and asked whether she could publish one of my posts on her Spanish journal. The post she wanted is titled Balance and I have no idea how she came upon it. It's actually one of my favorite posts, a tiny slice of a typical day in the life of me with my family, the seizures, some Chinese acupuncture and herbs, friends and carpool and a strange independent film thrown in. I told the Spanish princess Isabel yes, of course you can publish this in your literary journal. I would be honored.


And so it was. The journal is called Yareah, and it looks pretty wild.
Here's the link (and good luck with navigating the site -- it's a bit difficult, but I'm definitely in there on page 22). They've changed the title from Balance to PseudoFaulknerJoyceType. All I have to say about that is !!!!!! (I actually used those three names in the body of the post as a sort of joke). There's a header, too, written in Spanish. If you can, please translate it and let me know what it says.