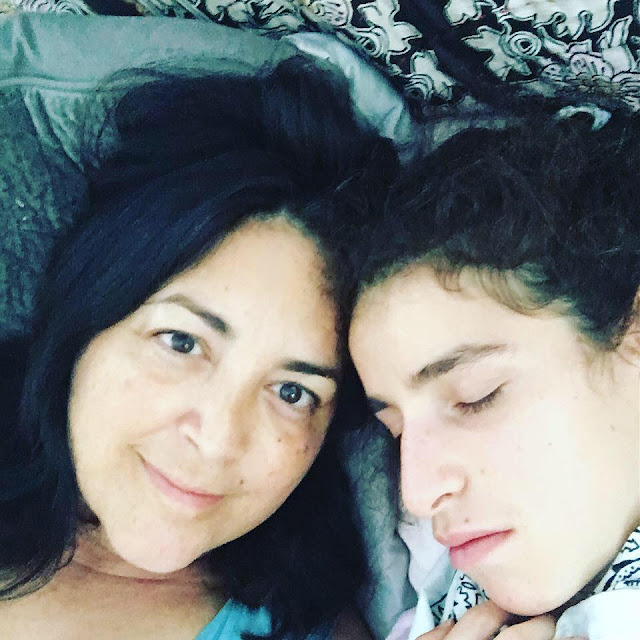 First of all, I'm going to ask you to view the following video, if you can.

If you can't see it, let me tell you what it's about.

Dr. Shaun Hussain, a pediatric epilepsy specialist at UCLA School of Medicine is a leading expert in the hard to control epilepsy syndromes category. That would include children who suffer from refractory seizures -- the seizures that medication does not help. Sophie was diagnosed with infantile spasms, one of the catastrophic epilepsies, when she was less than three months old. Dr. Hussain was probably in high school when I began injecting Sophie's thighs and arms with high-dosage intravenous steroids and then her first benzodiazepine which was, in the dark days of the waning twentieth century (1995), not approved for use in the United States. The drug was called nitrazepam, and it was given to me in a process called "compassionate protocol," a phrase that I can only throw my head back and laugh a long and bitter laugh over, today.

Today, when children are diagnosed with infantile spasms, they are still treated with much the same protocol, even though that protocol is not effective. Yes, new drugs have been developed and approved, imaging is more powerful and surgical intervention is more prevalent and sophisticated, but treatment is still not entirely effective, and a diagnosis of infantile spasms remains one of the most devastating pediatric epilepsies. Not a week goes by that I don't read about, receive an email from, a telephone call or a referral from someone whose child had infantile spasms, has infantile spasms or another epilepsy syndrome and who is struggling with constant seizures despite multiple drugs, often in combinations of three and four -- drugs with hideous side effects.

As most of you readers here know, over the next nineteen years after her diagnosis, Sophie was given twenty more drugs in various combinations, many of which were not approved for use in the United States, were only newly approved and little studied or not approved for use in children. I can honestly say that at a certain point, these drugs were prescribed in a way that I can only compare to a primitive crap shoot -- that the series of neurologists who prescribed them would often compare the situation to throwing darts, and that one or two of them openly admitted that they just didn't know how the drugs worked, why they didn't work and what to do, really, about Sophie. Sophie is not alone in this experience. Children like her are legion. When she was nineteen years old, I learned about The Realm of Caring* and the Stanley Brothers and put Sophie's name on a waiting list to try their high CBD oil. We began to give her cannabis oil called Charlotte's Web in late 2013, and her seizures stopped for the first time in her life for a period of weeks. In the nearly four years since, we have weaned her completely from one drug and are slowly weaning her from the benzodiazepine clobazam (Onfi) that she's been on for nine years, a drug so vicious that we might never be able to get her off of it, such is her dependency and the damage it's wrought on her brain. While she is not seizure-free, and there have been periods of great struggle, we achieve long periods of seizure freedom through careful tinkering with dosages and strains, the addition of THC and careful monitoring. Her quality of life -- and our family's -- is vastly better.

But this isn't about me.

Dr. Shaun Hussain is leading the cannabidiol studies at UCLA and thus has ties to two pharmaceutical companies, namely GW Pharmaceuticals and Insys. Feel free to read up about both companies and what they're doing. The title of this Washington Post report should give you a taste: A Pharma Company that spent $500,000 trying to keep pot illegal just got DEA approval for synthetic marijuana.

In the video, Dr. Hussain makes some startling and very disingenuous remarks about cannabis medicine, including the horrendous last case history. It is literally rife with inaccuracies and bombast -- stuff that I won't deign to go over.  I participated in a panel "discussion" (quotes are because there was no discussion as the Powers That Be literally shut down we uppity folks with the tiny little mother minds™) with Dr. Hussain several years ago at a Brain Summit put on by the Epilepsy Foundation of Greater Los Angeles. The panel "discussion" was about cannabis medicine, and I spoke from a parent perspective. I wrote about it here as it was the proverbial straw that broke this camel's back as far as my trust and respect for the neurology world in general and the party line about cannabis in particular. It was insulting, demeaning and patronizing, and it continued even afterward in a series of emails with Dr. Hussain.

Toward the end of his presentation on the video, he advises the doctors in the audience that it would behoove them to report those parents who are using cannabis medicine with their children to Children's Protective Services.

That might be the second straw that drives the broken-backed camel into the sand.

This video will probably be taken down, but before it is, take a look and a listen. These are the people -- DOCTORS -- with whom we must work as we navigate the medical cannabis world. Here's my comment, in case, it's taken down as well:
After parenting a daughter with a severe and uncontrolled seizure disorder for over two decades, I can't say I'm surprised, but I am appalled at the outright disingenuousness of Dr. Hussain's presentation here. The pretension, the condescension and outright ignorance don't enrage me as much as they confirm what I've learned as well about the neurology profession in general but specifically this subject. The laughter in the audience confirms, to me, that those in attendance, including the presenter, are nothing more than shills for the pharmaceutical industry. To speak of and warn doctors of their duties as "mandated reporters" is unethical and profoundly disturbing. I know for a fact that these same doctors are actively nodding their heads as parents navigate the cannabis world. You HAVE violated your Hippocratic Oath, quite effectively and systematically, over and over. I imagine this video wasn't intended for public viewing and that it will be removed, but there are many of us out here who will have seen it, transcribed it or will have heard of it. It doesn't surprise us, but it will further disintegrate the relationship between doctor and patient and foster increased mistrust toward those who are supposed to be serving us. Yours is a profession that will prescribe a powerful benzodiazepine to an infant, or any number of powerful drugs not studied in children yet remain obdurate about a treatment and a medicine for which there is reams of data and information. Shame on you.


*Realm of Caring is a non-profit foundation. The Stanley Brothers make Charlotte's Web. There are several other manufacturers of cannabis oil  using different strains of marijuana. Dr. Hussain, while joking about the good-looking brothers, neglects to differentiate between the two.