Hyperbole and Cliche on the Eve Eve Eve of Thanksgiving 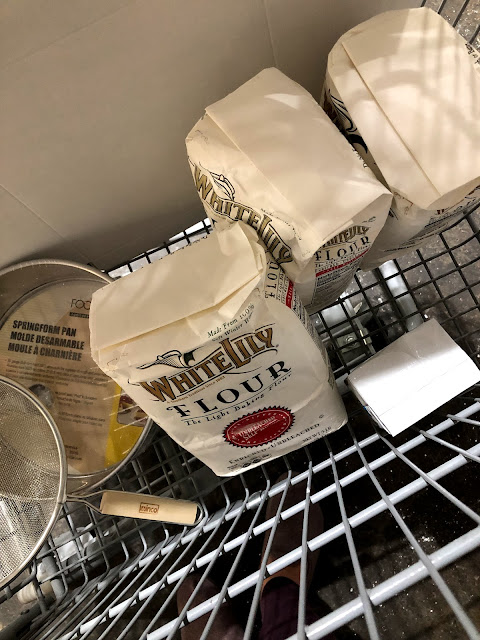 Yes, that's white flour you see in the basket, and it's bleached white flour and it's self-rising white flour. I'm fixing (like my Tennessee friends say) to make about ten dozen southern biscuits. Angel Biscuits. Our beloved Mary Moon provided me with a recipe. I'm also baking about ten thousand apple pies and about five thousand pumpkin cheesecakes. Hyperbole is the rule today. The apple pie is a pretty standard recipe that I've made a bazillion times, and the pumpkin cheesecake, the same. I've found that slicing the apples very thin -- like about 1/4 inch -- is the trick to ensure that the pie doesn't become a mushy mess, although mushy messes have their charms. You let the slices macerate in some lemon juice, brown sugar, white sugar, cinnamon and salt first, and then you drain them and boil down the juices into a thick syrup that you then add cornstarch to and toss with the apples before adding them to the pie. You know the rest. The pumpkin cheesecake is a tad time-consuming and after being cooked must chill overnight in its springform pan before being un-molded, and the only trick I have for it is to use really good cream cheese because the cheap kind of cream cheese sometimes has a lot of water in it (kind of like cheap butter) so it's better to use the good stuff, if and when you can. Despite making ten thousand things, I remain a bit of a snob when it comes to baking and pastry. If you're a new reader, in another life I worked in fancy-schmancy kitchens in New York City under asshole chefs and learned all the finer things in pastry, before being thrust into the cruel world of childhood epilepsy when my infant daughter was diagnosed with it and so began The Seizure World which might be sort of like The Matrix (I have a limited understanding of the movie as I am decidedly not a fan of sci-fi) in that it's kind of a simulacrum of the world as most know it where tiny little mother minds™ are trapped and enslaved. Wait. That's the real world, too, isn't it?

Hyperbole aside, I have a hell of a lot of biscuits, apple pies and pumpkin cheesecakes to make over the next few days for my cottage business, Everyone Needs Cake.™ Because of that I have decided not to make Thanksgiving dinner this year, and both my sons (Henry comes home tomorrow night!), The Bird Photographer and I will be feeding the homeless on Skid Row Thanksgiving morning. Then we'll return home and eat pizza and pie.  It's just as well (it's also cliche day, apparently). We have much to be thankful for, and it isn't the origins of the country, to tell you the truth. Or the Pilgrims that set the tone for the rest of history, either.
Posted by Elizabeth at 9:43 PM