Trauma in an Insane World 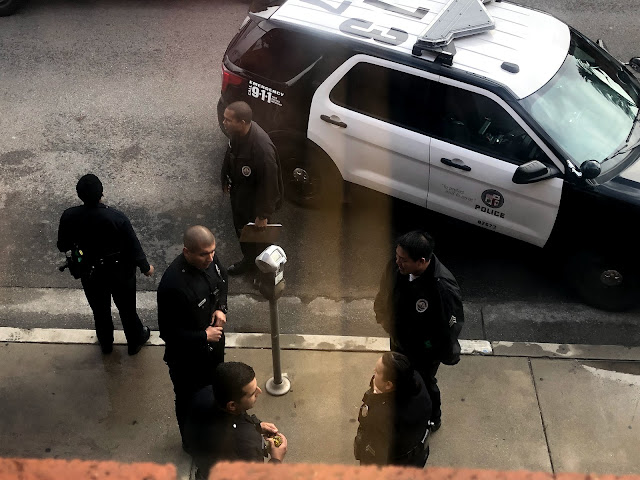 So yes, the world is broken. We have fallen from the Garden. But this is just a reflection of our own broken relations. Instead of obsessing over the fallen state of the world, it is incumbent upon each of us to take universal responsibility by looking within. It is only from that internal place of healing and strength that we will find the cure for what ails the world.


Zhiwa Woodbury, from Healing Our Trauma Together in an Insane World

When my Lyft pulled up to the intersection near the school where I work, a line of cars blocked the view, but it wasn't hard to see how many police cars were parked alongside the building. I got out of the car and walked toward the corner, my heart beginning to race. Yellow tape blocked the perimeter of the school, and traffic was being diverted. It was Valentine's Day and the one-year anniversary of the Parkland shooting. I spoke to a bystander who told me that there had been a shooting outside the school. It's a Jewish school and synagogue. You don't need to know much more than that to feel dread. I was allowed to go into the school in a private entrance and faced a sort of controlled chaos that I won't soon forget. This is what happened. A self-identified transgendered woman (I am loathe to write that out, but it has context as for the next few hours we spoke of "him," and "the guy" and evidently those hunkered down in the identity wars claim that it's a sign of persecution) had roamed about the school for nearly an hour, surveying it and taking photos and videos with a sophisticated camera. This alarmed the armed security guard, for obvious reasons. It's a Jewish school. All of this was monitored inside by women in the office who can see everything through security cameras. The security guard asked the woman to stop taking photos. They "got into it." The women inside called the police. They called the police several times. The guard went inside the locked gate, an open vestibule that protects the inner, also locked door. We don't know what was going on inside the guard's mind, but eventually he pulled his gun out of the holster  (live-streamed by the woman who, it turns out, is a You Tuber) and cradled the gun, insisting that the woman stop filming the school. We don't know what prompted him to, but he shot the gun toward the sidewalk where it evidently ricocheted and hit the woman in the leg. All of this is on the woman's live stream with narration, including constant profanity. Eventually, the police came. They arrested the security guard and took the woman to the hospital who walked out with what is called "a graze." Meanwhile, back in the school we spent the remaining periods talking through the drama and calming the girls. It was intense. Later, we learned that the woman has a history of provoking incident at government facilities. She claims to be protecting the 1st Amendment. She does all of this live and streams it o YouTube. The language. You Tube. Live-stream. Transgender. Self-identified. Hate. The guard has been charged with committing assault with a deadly weapon.

I know what I think. I think it's insane to carry a gun. I think the belief that you are protecting yourself with a gun is dumb. I think it's unfortunate that the security guard felt he had to fire it. I think it's insane to believe that the YouTubers identity as a transgendered woman should be an issue in this story -- on any side. I think it's terrible to walk around a Jewish school in Los Angeles and live-stream the recording. I think YouTubers are sick and disturbed people, their vocation useless. I think it's horrible that the LAPD didn't respond more quickly and that the security guard felt so much pressure to shoot. I think it's terrible that school shootings and hate crimes are so prevalent, our minds naturally go toward them at the slightest provocation. I think that you couldn't possibly make this shit up, and if you do, you are disturbed.

With all that in mind, I read this amazing article today about trauma and environmental catastrophe.

There is so much good in the world.

Posted by Elizabeth at 9:48 AM