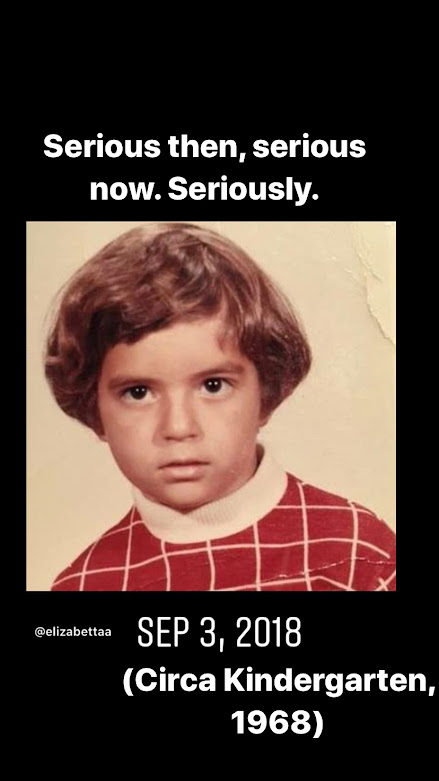 My kindergarten picture makes me feel an enormous sense of relief. It grounds me. It makes me smile. I'm not the sort of woman who smiles easily, and I've been the sort of woman who, when asked to smile (usually by men), feels but doesn't act (I'm that kind of woman) irritated. That's partly because it's always annoying to be told (by men) to smile (and also to be called, cheerfully, by medical professionals Mom), but also because a serious person generally has a lot of wackadoodle inside herself, no small amount of weird and a predilection for dark humor that those who wish for smiles don't see. At worst, the men who tell me to smile might/would prefer that I not be so serious, that I look pretty or would look pretty when you smile. I was serious at five years old for my very first school picture. I didn't like birthday parties or cartoons, and the show Zoom gave me a headache. I read every single book in the children's section of the library, made my way methodically through even the biographies. I imagined myself a changeling, dropped in the middle of a cheerful family. I grew up in a happy family, but I imagined myself somewhere else, a  Jane Eyre, an orphan. Being serious doesn't mean I'm not joyful, though. I know that I was filled with joy that day despite my serious expression. I'm a serious woman who doesn't smile easily but am busy, in there, laughing.

That's all I'll say about that.

I've been thinking a lot lately about my Italian grandmother and my Syrian grandfather. I've been wondering how they'd respond to this weird world, this circus, this Terrible America. They lie on opposite sides of my family tree, my father's mother and my mother's father. I've been thinking about them because of two separate details I remember, that stand out, that define them for me, decades after they died. I feel both of them in my bones. My Nonni wore a black dress and rolled thick stockings with black shoes for as long as I can remember. In her later years, she stayed with my family for a significant part of the summer. She walked around the house with her rosary beads, muttering, Pray that I die, pray that I die. Over and over she prayed that she'd die. She was serious. My Syrian grandfather chain-smoked even after having part of a lung removed. When he got riled up, which was a lot, he yelled the Arabic word for SHIT! which is pronounced Cutta! with a hard back of the throat c. He was serious, too.

Posted by Elizabeth at 7:22 PM