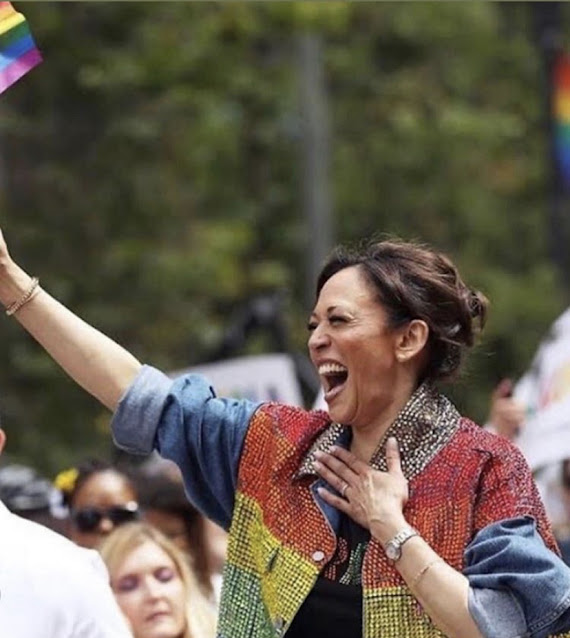 It was the best day in a long long long long stream of days, wasn't it? When Kamala came out in her white suit, the tears started falling, and I felt absolutely nothing but happy when she spoke and then Joe spoke and then all those people in their families walked up there and all those silly fireworks went off and for a moment -- yes -- I felt glad to be American and to be a part of it. I remember going to a resistance meeting in another lifetime, shortly after walking with three quarters of a million people in downtown Los Angeles on the day after Dear Leader inaugurated himself and we talked so passionately about grassroots activism and what we'd need to do to change things and we did do those things but damn the years went by and wore us down and everything, literally everything, that we thought might happen did and more and nearly destroyed us and did destroy hundreds of thousands of lives but we kept it up. We kept up the calls and the postcards and the letters and the writing and the marching and the protesting and the talking and the arguing and holding people accountable and calling out bullshit when we heard it. We stopped when we were exhausted and other people stepped in. We laughed a lot but we were fucking sick of it all, too. And then this week happened and it was probably the weirdest three days ever, waiting to see what would happen, hunkered down in our homes, stepping over the homeless, ordering our groceries, teaching our kids, wearing our masks and posting memes and wiping up drool and comforting our seizing daughters and reading Twitter and novels and Louise Gluck poems and not sleeping and all the while trying to wrap our minds around the fact that nearly 70 million people who live on the same land actually wanted Dear Leader again, actually voted for the man and justified their votes with their usual talk of pocketbooks and Jesus and Israel and socialism and godlessness and killing babies.

So, yeah, I'm very happy tonight. It's as if a weight has been lifted and thrown off, far off and we're all ready to do what's next. We hopefully won't ever have to hear from a leader who not only mocked disabled people but actively worked toward and supported and put into place policies that harmed our children. I don't want to ever talk about him again. Tonight, President-Elect Joe Biden included persons with disabilities in his speech and spoke in complete sentences with vigor and not a trace of malice or threat or law and order. He spoke little of himself and much of those who'd put him there up on that stage in Delaware and how wonderful that bells rang in France and people shouted in Germany and people danced in the streets all over this country, this grand and terrible place.

Posted by Elizabeth at 9:53 PM