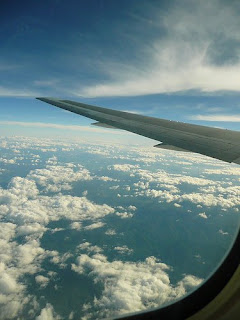 I get on the plane after waiting for two hours in the Dallas airport. I have already finished a Redbook magazine and move on to Yoga Journal. I am parsing my reading material, saving the good stuff for last. The stewardess, or flight attendant, has very long blonde hair that appears teased and sprayed. She's wearing a very short skirt, made of some sort of uniform material, stiff and navy. She's wearing matte tights and almost-stiletto heels. I wonder what it feels like to walk up and down the aisle in shoes like that and whether her thin hips only brush the sides of the seats as she walks. She looks over at me and tells me to wait and the woman behind me bumps into my back and apologizes. I wait and then the blonde tells me to go ahead and I walk down the aisle and find my seat -- 17C -- an aisle, and after I push my carry-on into the overhead, I sit down and buckle my seatbelt. The woman sitting next to me, in the middle is Asian or Filipino. I can't tell, but she's got a rosary laced through her fingers and a sheet of paper with some prayers to Jesus on it. I sense that she's afraid but I don't feel kindly toward her because she's got her arms planted firmly on the armrest and isn't sharing it. She keeps her arm on the armrest, insistently, aggressively claiming it and I want to tell her that airline protocol demands a sharing, a slight give and take but she'll have none of that and doesn't budge, even when I press my arm up against hers. When the plane takes off she fingers her beads and her lips move and then the plane is up and she leans over to put away the rosary and paper -- the Lord has done His work and saved us from crashing, so far, and while she's bent over, I put my arm right there, where hers was. And I've got it. Later in the flight when the flight attendants come by with headsets and then drinks and snacks, she asks questions with obvious answers. "We have cheese and crackers," the flight attendant says, "for $4.00." The lady next to me asks for crackers, for free, whether she can have them. She asks me, like I have all the answers, and I want to say to her, as if I were talking to my children: "Didn't you just hear what she said? Why don't you LISTEN?" I'm not sure why I'm feeling so unsympathetic, but I really am and it isn't until I'm fully immersed in my T.C. Boyle that I let her fade from my peripheral vision and acquiesce. My left arm is resting lightly on my leg, having given up the fight for the armrest. When the plane begins its descent she pulls out the rosary beads and the prayers and moves her lips, silently, and the plane lands, safely.
Posted by Elizabeth at 11:36 PM