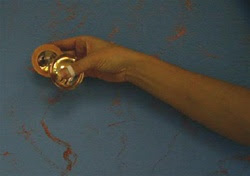 I had a good laugh, today, with my friend Jennifer in Wisconsin. We met through work that we both do for children with special healthcare needs. One of the truly blessed things that happens when you have one of these children is that you meet people and are instantaneously bonded to them despite vast differences. This doesn't always happen for me -- there are plenty of mothers and fathers from whom I'd rather run. But Jennifer is a blessing -- she's intelligent and funny and warm and caring. She's dealt with her daughter's seizure disorder with uncommon grace and humor, and she's always willing to bounce around ideas. Today's telephone discussion revolved around The New Drug. She's considering putting her daughter on it and wondered what I thought. I gave her the update -- that Sophie is doing somewhat better although it's nothing to feel ecstatic about. The side effects appear minimal and my main concern is that I've been unable to locate anyone who knows about it or is trying it. Jennifer said that she knew of several people who were, and we decided that we all, in a sense, have a Banzel bond. I've been calling the drug rufinamide because I just can't stand the trade name.

Who names these drugs anyway, and is there any sense to their monikers? I decided to surf around word origin sites and broke the word into what I thought were the two roots:

Here's what I found on the Online Etymology Dictionary for ban:

O.E. bannan "to summon by proclamation," a sense surviving only in banns of marriage (1198; spelling with double -n- attested from 1549), which also is partly from O.Fr. ban "public proclamation," from Frank. *ban, cognate of the O.E. word. Main modern sense of "prohibit" is from O.N. banna "curse, prohibit," and probably in part from O.Fr. ban, which also meant "outlawry, banishment." O.E., Frank. and O.N. words all are from P.Gmc. *bannan "proclaim, command, forbid" (cf. O.H.G. bannan "to command or forbit under threat of punishment," Ger. bannen "banish, expel, curse"), from PIE base *bha- "to speak" (cf. O.Ir. bann "law," from the same root; see fame). Sense evolved from "speak" to "proclaim a threat" to "curse." Banned in Boston dates from 1920s, in allusion to the excessive zeal and power of that city's Watch and Ward Society.

And here's what I got for Zel:

Non-English Usage: "ZEL" is also a word in the following language with English translations in parentheses.

I'm not sure what all this means:

Proclaim a threat to mettle?

But I also stumbled on this:


"Where, some hours since, was heard the swell
Of trumpet, and the clash of zel."

I'm going with the zel and forgetting about the ban. I'm hoping that Banzel is a cause for celebration. NOt just for Sophie but for Jennifer's girl and any other family brave or desperate enough to try something new.

And I'm still going to call it rufinamide (don't get me started...).
Posted by Elizabeth at 8:58 PM