poetry instead of Rush

Even I'm getting tired of all this brouhaha over Rush and his vile comments. There are people in my neighborhood, minor television celebrities who are getting in trouble now for nasty Tweets. He was just trying to be funny, apologists will say about Rush. She's really a nice person; it's her politics that aren't, one of my friends said about the minor celebrity. Anywho. I grabbed the February 23rd issue of The New York Review of Books and felt a frisson (how's that for pretentious) when I opened it to The New World of William Carlos Williams, a review of three new books about the great modernist American poet with a great big photo of the dear man on the first page. 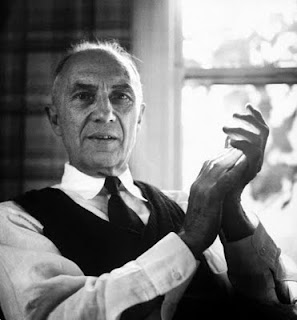 I just quoted from one of Williams' poems the other day on this blog because my dog-eared copy of one of his books of poetry is one of my favorites. What synchronicity! What serendipity! What does this have to do with Rush? Well, about halfway through this five million word article, when I was well on my way to a happy oblivion, I read that Williams was notoriously insecure and perhaps even insanely jealous of his more famous poetic colleagues -- the Ezra Pounds and H.D.s, especially the T.S. Eliots. When he left his home of Rutherford, New Jersey (where he worked as a general practitioner, serving a poor and immigrant population) for a visit to Paris with his wife in 1924, he evidently felt paranoid and certain he was being scorned by the likes of Pound and H.D. And still, what does this have to do with Rush? Well, really, not much except that when commenting about his fellow poet T.S. Eliot, Williams wrote Maybe I'm wrong but I distrust that bastard more than any writer I know in the world today. He then compared Eliot's work to moles on a pig's belly instead of tits. I laughed out loud when I read that. I never really got into Eliot's poetry like I did Williams, and I thought how nice it would be if someone out in the ether could say something that perfectly cutting about a person like Rush.

So, there you go. Poetry instead of Rush.

To a Poor Old Woman

The Widow's Lament in Springtime


and think about this:

No ideas but in things --