The Semi-Annual Visit to the Dentist in Beverly Hills 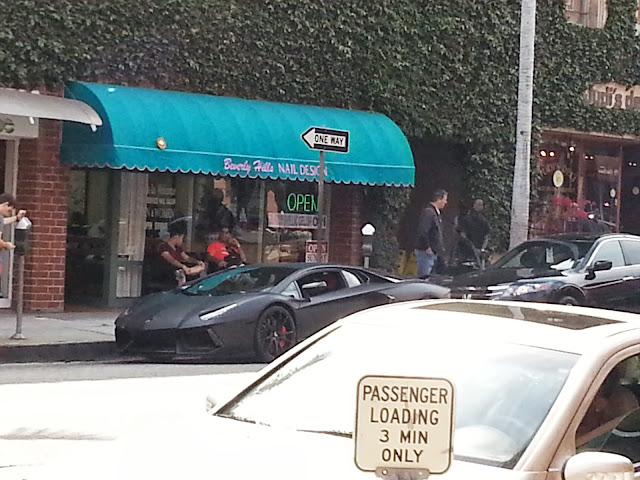 So, yes, I stood across the street from that black sports car and took this photo while my boys went inside the building behind me for their semi-annual dental check-up. It's a Lamborghini, Mom, Henry said, dismissively, and it might cost $1,000, 000. I think he was serious, but don't quote me as you know I tend toward hyperbole, and certain apples actually don't fall far from the tree.

The fact that I'd just given him a hard time for wearing his gray, polyester gym shorts to the dentist that he picked out at Target despite my protestations (I despise athletic shorts when they're worn as clothes and not for athletics), made his dismissal of the million dollar car and the subsequent posturing of the various large men positioned everywhere, cameras hanging from their necks, seem even more jarring to me, still a bit of a star f**ker when it comes to celebrities. I might be reading War and Peace, but when it comes to star sightings, I'm as excited as the next moderately overweight middle-aged woman to perhaps glimpse Johnny Depp or, if lucky, Javier Bardem. Just the other night, I walked in front of Annette Bening at a local restaurant as she waited for her car, and I admit to a frisson of pleasure that I'd come full circle. It was just a few years back that I stood on the steps of Royce Hall during an intermission of King Lear, looked to my right and noticed that it was Warren Beatty standing right next to me. I nearly jumped into his pocket.

Reader, I imagine you're wondering whether a moon, worns as if it had been a shell  has lost its devotion to all things disability related and might be morphing into a gossip rag?

After fifteen years in Los Angeles, a city that I never thought of as anywhere in particular other than the cover of an Eagles album when I was my sons' ages, I'm still a bit freaked out that I have two boys who are Angelenos. We're from LA, they say when we go back east, and I startle like I did when I took my first husband's last name and whenever I uttered Elizabeth Supercalifragilistic, saw the words in a cartoon bubble coming from my mouth. Being born in Los Angeles doesn't mean that you have blonde hair and skateboard in empty pools or even surf in Malibu before school, but it does lend a certain insouciance to the sighting of million dollar cars and people, and I guess that's a good thing.

I waited a bit outside the dental office and tried not to crane my middle-aged neck too far to notice who the paparazzi were waiting on, and after a few minutes someone came out from across the street, there was a bit of shouting and jockeying, the other big guys with the even bigger camera lenses pulled them up to their faces,  and some very large men pulled up right in front of the million dollar car and blocked it with their Exxon Valdeez cars so I really didn't see anyone or anything. For all I know, it was Beyonce getting a hair extension or buttock implants. I pretended to be a native, turned away and walked into the dentist's office to retrieve my sons who both got a good report -- no cavities, sparkly clean, and when Oliver asked why his teeth were sort of yellow despite brushing them all the time, the dentist told him that only million dollar teeth are that white. As reward for no cavities, I bought them each a cupcake from the fancy cupcake machine up the street, and then we walked up the stairs of the parking garage, got into our sexy white Mazda  and sped off.
Posted by Elizabeth at 5:41 PM