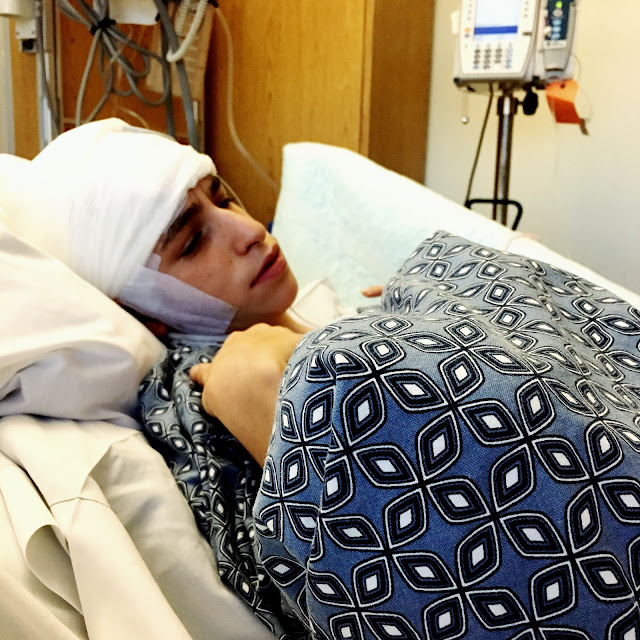 Aside from the putty and dirty lavender-colored walls in the hospital, I'm intrigued by the hospital gown print. Sophie almost looks like a Modigliani with her narrow face made even sharper by the tightly-wrapped turban. My mind wanders here and there during the interminable hours spent in the hospital. The hours are actually not interminable, though, as much as -- well -- hours. They literally while away. Hospital Time is something that I have struggled to articulate for as long as I've spent time in hospitals, and I want to do some justice to what, exactly, it means. The big round clock with the black numbers, hangs on the wall about four feet from the big black television and about six inches above the dry erase board that Robert the Nurse Assistant (when he introduced himself the first day, I thought he said I'm Robert the Narcissist, so I laughed and asked is it all about you? and he laughed and said that too) scribbles the names of who's attending us. The big black clock shows me every time I look up and glance at it (why? why do I glance at it? what does it matter?) what time it is, and I'm startled each time by how much time has gone by. I don't know how to explain this, really, and you probably won't understand unless you've spent some time in a hospital room. The time doesn't go slowly, really. It's not even boring. It's like being in a hospital makes a mockery of time. I've been here five hours! I'll think when I glance up at the clock, and in what seems like six minutes later, I've been here eight hours! It's really kind of astonishing. I feel the opposite of wired which would ordinarily be calm but it's not that either. Maybe it's a third state of being, a dimension all its own. I'm not complaining, just musing. During these hours not much goes on, which I imagine is something I should be thankful for as any number of things could be absolutely horrific in a hospital. The nurses pop in and out and the nurse's assistant, the one who takes vitals (weird expression, right?) tells me about her doll collection and then shows me a picture of the silicone toddlers that she dresses up and puts in a stroller and takes for a walk. I look up at the clock and notice that six hours have gone by as I spoon a pale macaroni and cheese into Sophie's mouth. I hear through the wall a man's voice saying Bend your knees, that's right, that's good. When I gaze out the large window facing east, I see some snow-capped mountains which I guess is nice, but really it seems like a mirage. The mirage would include the rest of you out there, living your lives, rain and sunshine, snow-capped, hours ticking and most probably defined where ours are blurry, cloud-covered.

When I think of the time, I think of bottle and a tiny ship suspended on a wave that does not move.

This morning while driving to the hospital I thought about meditation and how I am making a sort of meditation from this life. I was telling a friend that I'm not a chanter, but if I could make everything I do a kind of chant it was all I could do. Sort of an undoing. One of the nurses yesterday claimed that there's a meaning for everything, but you know what? I disagree. I don't think meaning is inherent in anything, really, nor is the absence of it. It's funny how we look for meaning and then find it. I think I'm making meaning which doesn't mean I'm in control but rather exercising some kind of sublime creative agency, and Sophie's situation helps to give me license to do so. Does that make sense? Of course I feel despair and depression, too, and that's okay. See how I'm whiling away the hours?

Bless your hearts for reading. Sophie is okay. She'll hopefully go home tomorrow, although we're not quite certain. The two doctors who've been treating her are pretty awesome in that they really include us as partners. Maybe not equal partners since I'm basically calling the shots, but they're smart and humble and one even told me that I was the bravest mother he'd met. I told him that because he's not a pediatric neuro, he probably hasn't met many mothers because the ones I know are so kick-ass brave, it'd take your breath away. They wish they could help us more, and so do I, but I'm struck by what seems to be a real shift in the neurologist/patient relationship. Since I haven't been in the hospital with Sophie for so many years, it's marked, and that's a good thing. I like to think that the work I and many of my peers have done for decades is finally making a difference, that medical students are being educated in empathy and humility. That or they're taking electives in theater and performance.
Posted by Elizabeth at 2:19 PM