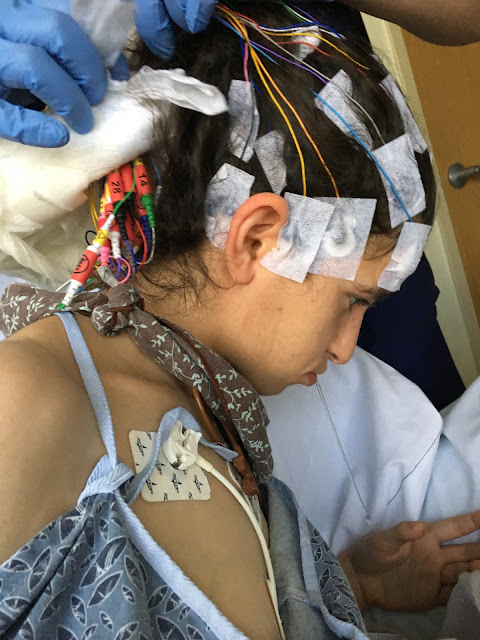 You didn't think I'd just let things go, did you? Just as they always have, and do, they percolate, lay down in layers on top of one another, waiting to be urged into shape. Did you know that Rome is a city of layers, that about fifteen feet down are the remains of Late Antique Rome (between 1500 and 800 years old) and then another fifteen feet below that is another? And so on. That dermatologist with the Drumpf hair wanted a CAT scan of the skull, threw out diseases and words, mused, casual, and then he dismissed the giant hives as coincidence and prescribed the antihistamine with the green label with a shrug.  I nodded my head and asked intelligent questions, like I do, but he disappeared in a puff of dander in my mind. You didn't think I'd let it go, did you? I lay down on the bed for hours as the words lay down in layers, waiting to be urged into shape. I feel the urge. Otherwise I'd go mad, not be mad but go mad. Go.

I read a free article in Esquire today about an epileptic man, Henry, who was rendered an amnesiac in the 1950s, after an esteemed neurosurgeon basically fucked up the surgery. Stripped his memory with knife. I read this on my phone while sitting in the car at a Valvoline and a woman with dreads poked around in the car's netherparts. I'd call that a coincidence -- both the fact that of all the things on the internets that I'd click on to read was a story about an epileptic (named Henry) and that my car's netherparts were being explored -- but I'm not like the dermatologist or even the neurologist who prefers the empirical. I'm more inclined to believe that there are no accidents. Plus -- you know -- those layers. The author of the article was the grandson of the neurosurgeon. Henry's brain, though fucked up by the establishment, proved to be incredibly useful over the years, providing us with a wealth of information about the brain. Henry himself, the profound amnesiac, retained the memory of the surgeon who'd taken his memory, though, and whenever he'd get stubborn, let's say, about taking his medication, all They'd (it's always They) have to invoke was the doctor's name, his authority, and Henry would comply. Even after the surgeon was dead and Henry sat for hours doing crossword puzzles in a chair at the home where he'd lived ever since, the once upon a time.

I am as far from stripped of memory as Henry was stripped. Those layers.

Remember the layers. The latest ones laid over six days in the hospital. Lying for six hours the day after we returned home, waiting for words.

I am a reluctant ringleader in the circus, whipping my lariat around, one hand on my crop. There are the clowns in the car, spilling out, so many of them. A distraction. That beautiful woman on the rope above -- her balance and daring! -- is me as well, an alter-ego to be sure, her daring my dissociation. Even tigers are tamed in the ring, but they return to cages, crunch on bloody flesh. So it's all illusory -- the entertainment. Why always my urge to flee? Sophie, under my arm to some distant place. Something like the Chinese mountain scene I copied in watercolor for a high school art class. The drifting narrow clouds over peaks, the gentleness and peace of it. We're always digging holes to China.

Did you think I would rest here in some new-found wisdom borne of experience, that the razor isn't as sharp, my whip as precise? Some of us struggle and reconcile.  I struggle and resist. Sophie's eyes and everything in them. We are unwitting Bodhisattvas.