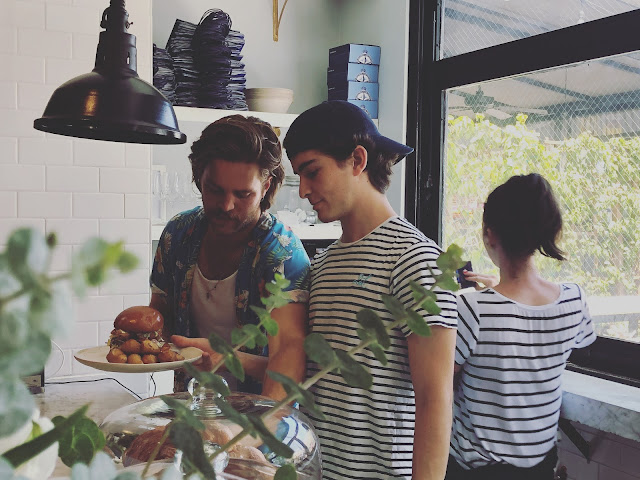 I went to visit Henry this afternoon at his new job. He's a server at a funky little place in Venice. Maybe I shouldn't use the word funky anymore since very recently, like yesterday, Oliver told me that it was embarrassing. Maybe he didn't use the word embarrassing, but he repeated the word funky in a voice that I guess is mine, at least the voice that both sons use when they imitate me, and while I imagine there's fondness in the teasing, it still takes me by surprise that I'm considered painfully uncool and old. Both brothers have jobs this summer (Oliver actually works nearly full-time all year round, recently opened a Charles Schwab trading account and has bought stocks -- no joke), and I'm very proud of them. It's been a long time since I've included them on the old blog, and just now I was looking for past posts in a kind of nostalgic way, and boy -- some of those posts were damn funny. I sat down at the bar of this little restaurant where Henry works, next to a younger woman who was drinking a glass of wine and eating a salad. Since I'm the chattiest person on the planet and the proudest, most embarrassing mother, I introduced myself to the woman and told her that Henry was my son. She told me that she had a four year old son, and that he was in a challenging stage. I told her that I remember well those challenging stages, but I found those times to be more physically challenging and the teenaged and young adult years more emotionally challenging. I didn't tell her this story, but Reader, I 'll tell you. Just the other night, we were sitting at the table eating dinner -- takeout Vietnamese because making dinner in the summer is just not my thing -- and the usual conversation between The Brothers began, and this entailed arguing about whether LeBron James or Michael Jordan was the greatest basketball player of all time and then something about the baseball player Mike Trout and Teslas and Elon Musk and then you're an idiot and you're an asshole and you don't know what you're talking about, and just when I was wishing that one day we would have a conversation about -- let's say -- the greatest living poet or how much better a film-maker Fellini is than Tarantino, Sophie had a large seizure that I just know was a result of the anger in the air and maybe even how boring her brothers' arguments can be (Sophie and I are the same about these things, I am certain, but she seizes instead of dying a little inside at the general clusterfuckery). I probably said as much, because now that they're 17 and nearly 20, I don't bite my tongue as often as I might have when they were younger. Enough is enough.

But here's the thing. Those boys jumped up and into action helping me to help Sophie, and I realized that I am, perhaps, the luckiest mother in the world. 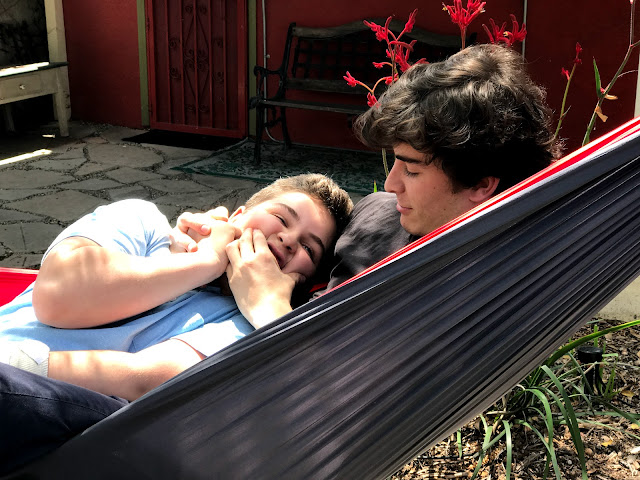