It's Not Who She Is 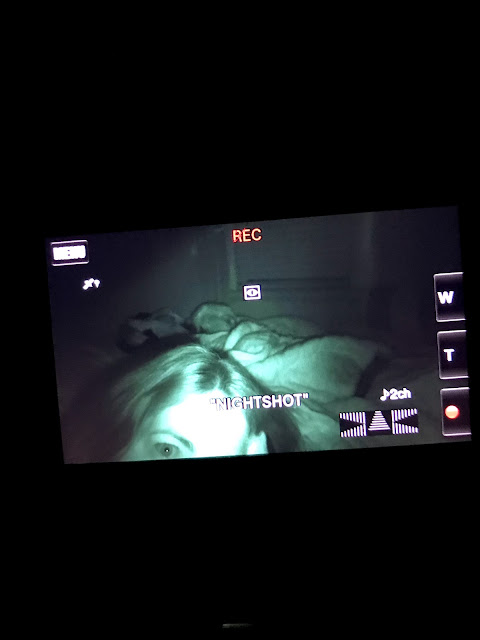 That's a spooky picture, isn't it? Sophie's the white-capped one in the background, lying in her bed. She was wired up today with an ambulatory EEG -- no reason in particular, although I'm interested in seeing whether she's had a return of the dreaded ESES. I think I wrote about ESES on this little blog back in the day -- Sophie had it when she was ten years old and again when she was fifteen. Yet, even as I type it out, I'm doubting that she's had a recurrence. It's not in my gut.

So, ye olde EEG. I remember when the EEG was ink on paper, the electrodes were glued on with an electric gun thing that made a horrible noise, and you needed the same gun and a foul-smelling ointment to get them off. The tech would fiddle with the dials as the ink jets clicked across the paper. It's all a blur, those early days -- a blur into darkness. They still use glue and colored wires that map the brain and record its activity (or fuckery, in Sophie's case) in a little box that you can sling over your shoulder. It's called an ambulatory EEG.

EEG is short for electroencephalogram, in case you're an initiate into The Great Mystery of the Brain. The EEG records brain activity in a moment of time, and in this case will record those moments of time overnight. If one occurs, it will "capture" a seizure.  It also shows the “background,” the non-epileptiform activity or changes, the slowing and spiking of brain waves. Whether Sophie has had a bazillion or no seizures clinically (to the eye), her background has always been abnormal. That’s it.

Despite the technology, it’s not a complete picture of Sophie’s brain.

It’s not who she is.

Every now and then I get a feeling of what it feels like to be accepting. The other night I got Sophie out of her bed where she'd been lying most of the day having had some seizures. I fed her some mashed pinto beans and avocado, and her mouth worked eagerly to chew and swallow it. These are small things, true, but I knew what it was to count them as something less than momentous and more like flow.