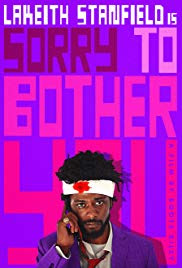 I didn't know anything about this movie except that it looked very cool and very funny in the way that young people are very cool and very funny only some of the time, but this movie was very cool and very funny the entire time, not to mention wildly entertaining and perhaps even brilliant. Watching it was like taking a ride or, rather, being taken on a ride before which you've been given some perfect drug that enables colors to be brighter, music to be more rhythmical, and people's eyes to be like portals to their souls, and then it illustrates the world as it is now, in this moment, even more surreal than you might have already thought it to be. Boots Riley has made a movie that's both surrealist capitalist nightmare and comedy, and he does it in a way that makes white people squirm because, in the end, it's about that -- us.

August: Osage County
Her
American Hustle
Posted by Elizabeth at 6:00 AM