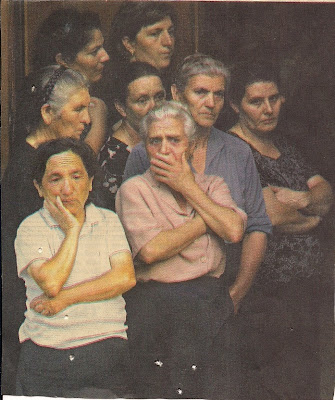 I think I've told you a bit about my long-dead Italian grandmother. Noni was a stereotypical southern Italian peasant who knew how to cook anything but who couldn't read or write. She believed fervently in Mussolini and the Pope and the sanctity of her sons (she had three and two daughters, but they didn't count as much). She was superstitious, insanely so and rarely acknowledged when anything good happened -- in case the good was jinxed by the bad. Her genes must run thick through me because I feel terrified to acknowledge the good, especially when it pertains to something really, really BIG. Like Sophie.

The photo above is from the front page of the Los Angeles Times newspaper, probably over a year ago or so. It's a picture of the ladies of a village whose name I've forgotten -- a village famous for its mafioso. There's been a sting and many of these guys have been killed and the women are watching, I think, as their coffins are carried down the street. Maybe I've mixed up the details, but the picture speaks to me. I see myself in these women and though separated by thousands of miles and a generation, as well as education and a culture vastly different, their placid anxiety and stoicism are echoed in me. Without backsliding into irony or sarcasm, I'm only a step away from wearing black every Tuesday (the day Sophie was diagnosed) and tightening my lips into an ever-thinner line.

Sophie's seizures have decreased dramatically with the homeopathic remedy -- and I mean DRAMATIC.

Now, go knock on wood three times and pretend you didn't hear it.
Posted by Elizabeth at 9:46 PM