In keeping with my Christmas at the Koreatown carwash

I bring you Norrywood. This house is about 1/2 mile from my own. On a typical day, the semi-circle of Michelangelo's Davids sparkle in the sun behind a white fence and in front of several very large, luxury cars that are each painted orange. The word is that a couple of music producers live there and long ago scandalized the otherwise posh neighborhood with their love of Italian sculpture (I, personally, love the idea of bugging the old guard). When the King of Pop died last summer, each David was clad in a tiny, Michael Jackson-style jacket. I curse myself for not taking a picture. But it's Christmas when the place really shines, and despite a less than stellar year in all things economic here in Los Angeles, Norrywood has outdone itself. Unseen in this photo, a black Santa sits on a bench, his hand raised in a black power salute,  with his beloved Mrs. Claus. There's a six or seven foot statue of the numbers of the year, 2009, all gold and glittery. And the addition this year of the giant red crown on the roof, overlooking an enormous cut-out of just who exactly is it? made all of us squeal with pleasure when we rounded that section of Third Avenue and saw it in all its splendor this week.I don't even think I could describe what it looks like at night, lit up and festive and oh-so-Christmas-in-a-stereotypical-LA-way.

Trust me. It's fantastic.

In fact, we don't need a carol of the day today. What we do need, though, is a way to take a photo at night so that you can really SEE the glory of Christmas. All of it. Click on the picture to really check out the details. 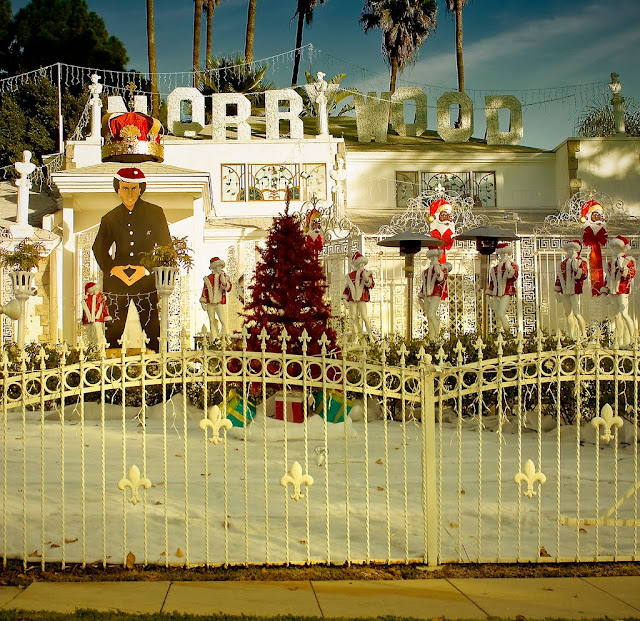