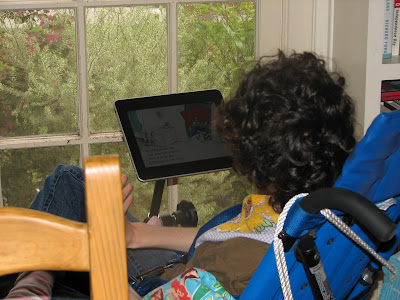 Sophie's brain has had a break of late, a break from the seizures that have plagued her for nearly sixteen years. We don't know if the IVIG is finally taking effect or if the Vimpat, a new drug, is working where eighteen drugs that came before had not or whether the new homeopathic remedy and the attentions of our beloved osteopath, Dr. Frymann have righted her brain into a semblance of calm. I actually shouldn't say calm because she is not calm. She is alert and awake and a bit agitated. She is wired,. Her eyes are large and inquiring; her hands are busy and she wants to put everything in her mouth to chew. She hums constantly and throws herself around, banging her head to the right. I imagine that she is seeking input, pressure, focus. I imagine that her brain, anesthetized, rendered nearly comatose from constant seizures is free and open but buzzing and not in a good way. I imagine that outside stimuli is immense and that she has no way to organize it all. I imagine the neurons as wired as her curly hair. It makes me a bit tired. Today, when her head hit mine as I was feeding her breakfast, tears pricked my eyes and I rebuked her. Tears came more freely then as I felt the transitory nature of things -- my fear that it was going to end soon, this seizure-less respite, my sorrow that I even have this fear; my feeling that I should be crawling on my knees to some sort of shrine in gratitude but I'm not, my worries and anxieties about money and care for her even when she has no seizures, my near-disgust that it's not enough when it is enough.
Posted by Elizabeth at 12:52 PM