How We Do It, Part LVIII 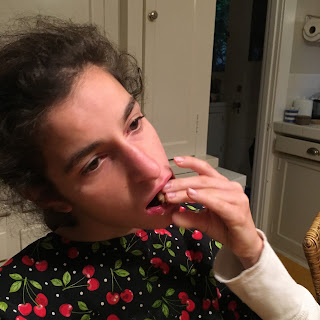 The liminal is a transitional period and carries a sense of ambiguity and disorientation. I feel it most acutely during the dark hours before dawn. A threshold, an open door, that strip of wood that marks one room from another, and I am on the other side.  I hover there at the liminal. Sophie had about six small seizures that we call big this morning. They came as she slept, a jerk, a groan, a stiffening of her arms and then the rhythmic fold, unfold, fold, unfold. She thrashed this morning when the jerking stopped, out of beat, and then smiled, a grimace before she lay back, limp. Seven times. The threshold of sleep and wake, death and life. I hover there at the liminal. Disoriented, even as I thrust one foot over, receive a blow to my face from her errant arm. The space between us liminal, too, where she ends and I begin. Having crossed over, she ate raspberries and cinnamon toast for breakfast while I sipped coffee. I drove to something new the other day, an open road, release. I entered the highway on a short ramp, slowed to avoid something that lay across the road, a broom, yellow stick and chopped off bristles, dropped there I supposed, by a witch who was done with flight.
Posted by Elizabeth at 8:09 AM

Email ThisBlogThis!Share to TwitterShare to FacebookShare to Pinterest
Labels: How We Do It, musings, seizures, Sophie