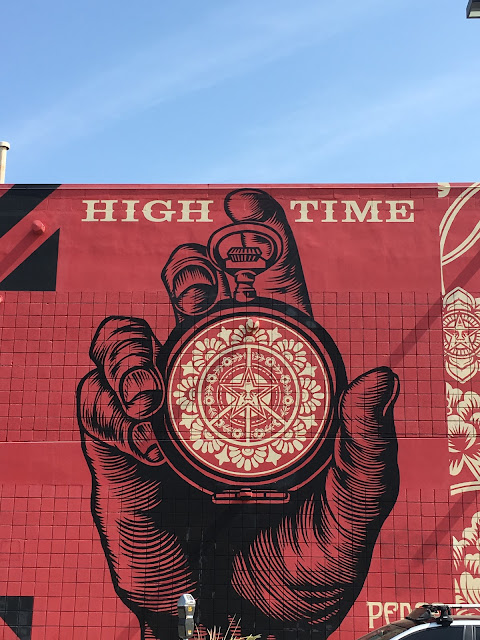 Ain't no shame holding onto grief as long as you let other good shit in, too.


I crashed last night at 10:30 after giving Sophie her cannabis oil and slept soundly until 1:30 when the baby monitor next to my head squawked. I got up to go check on the girl, found her sitting in the middle of the floor, wet and soiled, a stale smell permeating the small room. I changed her quickly and silently and lay her back down before going into the kitchen to get a glass of water, and then on my way down the hall Oliver emerged from his room and asked whether he could talk. Now? I might have said and maybe my hair stood on end and I might have looked less than maternal. Sophie was already out of bed again. I could hear her wandering around her room, looking for places that aren't padded to bang her head. Just a minute, I said to Oliver and went back into her room, led her to bed, lay her down and covered her up again. Go back to sleep, I said. Back in my room Oliver stood in the doorway, needing to talk about the tilt of the universe and what it means to be fifteen and have divorced parents. There were tears. It's normal to feel weird, I might have said somewhere between the Copernican theory and Descartes. I was both patient and in full Despair Camouflage. I filched the character Bubbles' remark that struck me like a gong last weekend when I finished The Wire binge. Holding onto grief even while letting good shit in. The talking went on for probably half an hour during which Sophie rose and was put back in bed several times, and I was emptied even as my boy was filled up. I told Oliver that perspectives are often most hard to find at 2:00 in the morning. That's why they're called the darkest hours before dawn, I said, while I gave him a hug. He said he was ready to go to sleep and went back to his room.  He apparently fell immediately to sleep while I lay on my back in full darkness my mind at peak performance. Sophie was up again, and when I went into her room she looked at me in the darkness with owl eyes. She had no seizures. There've been too many owls this week. I spent the next three hours finishing up paperwork on my desk and getting ready for my book salon tomorrow night. I read Toni Morrison's eulogy to James Baldwin and played three games of solitaire on my computer. Sophie was up the entire night. She had no seizures. At 5:00 I turned off the monitor next to my bed and feel asleep before waking again at 6:30 to give Sophie her cannabis oil again. I found her curled up on the floor, not asleep. She sat up and when I went to change her, I noticed a dark band at the top of her middle finger. It was hair, a hair, many hairs wrapped so tightly and thickly around her tiny finger that I had to work to get it off. The nail bed was blue but grew pink as I rubbed it. Had that kept her up all night? Hair, wrapped tightly around her finger, its source something too much to contemplate? There were cannabis oil stains on the pillowcase, and later, when I tied a kerchief around her neck to catch the drool, my mind wandered to its appropriateness. The kerchief is black with bright green marijuana leaves printed all over it. I thought it was probably a poor parenting move as she attends one of the district's largest high schools that has a two page dress code with admonishments against hair rollers and shower caps, white trim tee-shirts and bandannas. Then I thought if the thing carried the logo of Lundbeck, the manufacturer of Onfi, it'd be ok. So in a final act of civil disobedience, I lit up a giant spliff*, waved it over her and then dabbed a bit of CBD oil on all her pulse points for good measure.  The boys slept in. This is the good shit. I clocked in, stoned, for first shift.


*New readers should know that I haven't smoked pot in thirty years, that is a lame attempt at not so much irony but more like magical realism.
Posted by Elizabeth at 11:18 AM