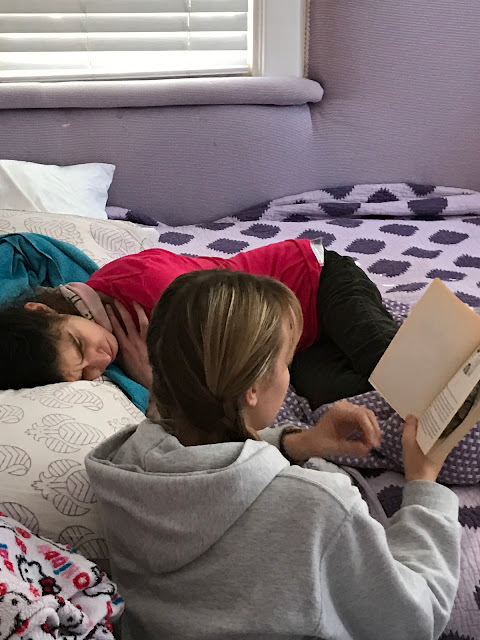 It's heartbreak that those of us who experience it rarely share, such is the pain. Our children with severe intellectual disabilities, while valued as part of their family and school communities (and often not even there) have few independent friendships and little to no opportunities for social interaction other than the times arranged with -- yes -- those people who are actually paid to be companions or to put on social programs and acitivities. There's a scene in the Caregifted documentary Undersung in which I ne of the caregivers, Ramona, says very quietly that she is resigned to always having to pay someone to interact with her autistic son. It's a moment in the film where I sort of stop and sit still, paralyzed yet intensely aware that I am really only made of bits and pieces, shattered.

Despite loving aides at school, a kick-ass teacher and group of students she has practically grown up with, Sophie has few friends outside of her family and the two women who have helped care for her over the years. Ok. She has none. I have largely given up on outside people, including friends and family, to take that kind of interest in her. Although bitterness occasionally rears up, I'm more inclined to understanding and accepting it, choosing to confide in my peers, other mothers and fathers who are long-time caregivers. I am pretty much resigned, like Ramona, to arrange and pay for Sophie to have companionship. She will be aging out of the school system this spring, and the nagging worry of what might come next is just that -- a nagging worry. I foresee a huge transition in my mind and soul, even if I do find a good day program for Sophie. It will be the next great twisted milestone in a long line of them, the chain of them, the tail of the dragon.

We live, I think,  in what I sense is the break of the heart, not out of choice but of necessity, and it's not the disability that we mourn, the differences of our children. They are complete and whole even in their brokenness. If disability is a construct, our heartbreak is for those who would persist in looking away, whether it's the culture or the persons within it -- you and you and me -- leaving our children isolated, looked on at best with kindness and at worst not at all.

During these tumultuous times, when it seems that the whole sane world is struggling to WOKE, I've found a new friend, a woman who is intent on her own young daughters being woke as well. I've known her for a long time but really only as an acquaintance, so when she asked me whether her daughters could possibly spend time with Sophie, I confess I rolled my eyes inwardly. I might have put bitterness aside, but I can still be cynical, and whether that's a defense mechanism or not, it's hard and well-earned. I did not expect anything to come of it. My friend's girls are eleven and fifteen years old, committed ballerinas and breathtakingly beautiful. They have clear eyes and when they first came over, they spoke openly to me, asking questions and observing Sophie in her room. They were sort of unbelieveably magnificent, if I can say that.

I'll say this, too: They have been spending time with Sophie, have come to our house on Sunday morning and spent time with her.

Yesterday, Sophie had a big seizure in the early hours before dawn. She had an amazing run of more than a month without any to speak of, so I guess it was time. Resignation. Acceptance. The girls had planned to come over, but I texted my new friend to tell her that it might not be a good time. This new friend is brash and funny and persistent, to say the least. She literally insisted that her daughter could sit with Sophie as she rested and give me a break. I took a breath and gave in. Sircey came over, walked into Sophie's room where she lay recovering from the seizure, went to the bookshelf and pulled down James and the Giant Peach. She sat down on the floor next to the bed and began reading to her. She read more than fourteen chapters in a quiet voice, adapted to Sophie sitting up by sitting next to her and continued to read.

I only poked my head in every few minutes to check on them and eventually stepped into the shower where I cried a bit, my tears diluted by the water streaming down my face and over my breasts, under which my heart with its scars, that break where we live, became a channel for them, a pathway down, a pool, an ocean under my feet.
Posted by Elizabeth at 12:52 PM