WOKE AF and What the Neurologist Says 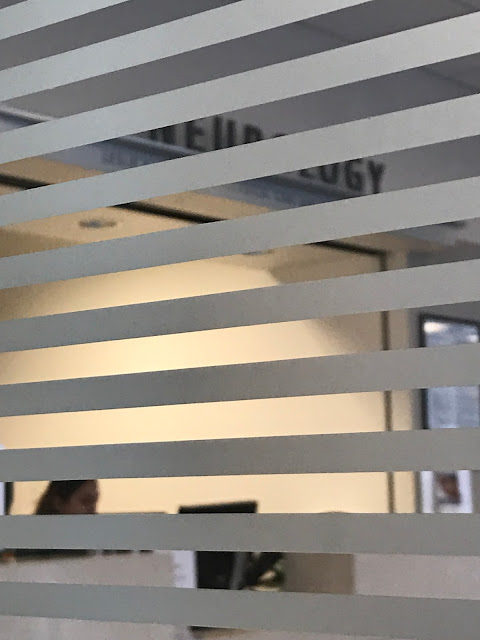 Today was our quarterly visit with The Neurologist.  This is generally something I prepare for by downing three Bloody Marys and a chaser of frozen vodka (see the other 4,321,896 posts I've written on the subject. They generally begin with a photo of the waiting room wall with the CONQUER and TRIUMPH sign over the list of wealthy donors), but I'm not going to complain today because -- you know -- I'm grateful.

We've got health insurance (for now) and The Neurologist is very helpful as far as getting those pesky pre-authorizations that Anthem demands every month for the drug that Sophie has been on for EIGHT YEARS. When the Fresh-faced Pharmacist of the Month rings me up at the CVS, he inevitably asks me do you realize how expensive this medication is? And I say I do but tell me again how much it costs. And the young man says, Today it's $435. And I say that should be covered by insurance. And he says, Well, it needs a pre-authorization. And I say, Again?We've been getting this medication for eight years! And he says, It's a controlled substance, ma'am. And I say, Yes, I know that but I'm trying to grift the system here and keep the drug wars going by having benzo parties with all my friends. And he says, May I see your ID? Reader, I'll leave it up to you to discern which of those were alternative facts and which were the real thing, but I have digressed from my point that The Neurologist always helps me with The System and for that I am exceedingly grateful.

I'm also not going to complain about today's visit with The Neurologist because Sophie has been seizure free for more than three weeks. Yes. We have found the sweet spot, I guess, at least for now. I figure I can cover any jinxes by readily acknowledging that we might have a downturn at any moment. Downturns and rebounds are equal opportunity dictators.

I posted this picture of Sophie on Facebook this afternoon, and my feed literally exploded. Everyone is, of course, thrilled that Sophie is doing so well and many asked why? Here's why, I think, at least for now: Sophie was overmedicated on Onfi (the benzo that needs the pre-authorization) and the CBD. We know that CBD can jack up levels of Onfi, so when Dr. Bonni (Sophie's cannabis doctor who recently published a great book all about cannabis medicine that you can order on Amazon) suggested we decrease either the Onfi or the CBD to see if she responded, I naturally chose to decrease the Onfi. Faithful readers might remember that we jacked up the Onfi back in the fall when we spent six hideous days in the hospital ripping off the Vimpat, and I guess after a month or so her levels of Onfi were enough to put her in what I thought was an overall DECLINE. I was scared, ya'll and also resigned to -- well -- you know.

To make a long story short, I took away some Onfi and do you know that Sophie perked up? She more than perked up, actually. She is WOKE. She is rowdy. She is ready to fight with the rest of us against those who would stand in our way (we're talking about you Drumpf, and you Sessions and you Price and you DeVos and all of you who condone and support them and their retro policies that will hurt her and tens of thousands like her). She is not having seizures. She takes Onfi twice a day, CBD twice a day and THC once a day.

Speaking of being WOKE, what did The Neurologist say? She was thrilled that Sophie is doing well and took care of my pre-authorization needs, but she also had a few choice words to say about the current clusterf**k that is our country. She was walking out the door, scribbling on a pad, but she said, I will NOT be here if the ACA is repealed and we go back to the Dark Ages before it when I had patients begging me not to write diagnoses in their charts. I think she kept muttering that all the way down the hall before she disappeared around the corner.

Posted by Elizabeth at 5:19 PM