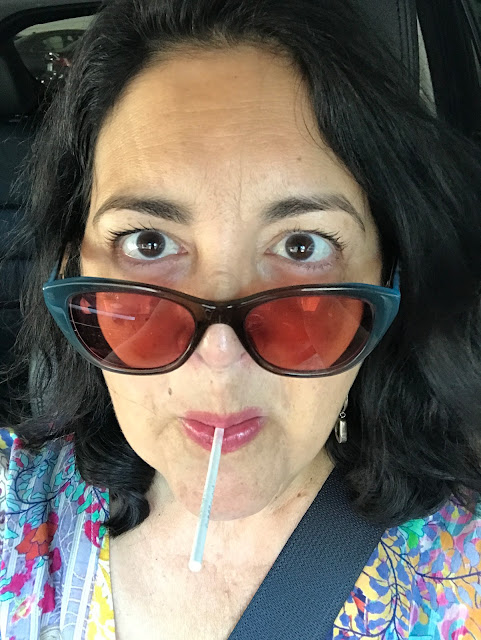 A dear online friend mentioned my "fuck you stare" yesterday, which I was completely unaware that I possess. Another dear online friend private messaged me that I did not possess a "fuck you stare" but had "beautiful black eyes" and "the weight of the world." She also told me that I had plenty of "fuck you" writing. I sent the former the photo above and the latter a message saying that the former meant no harm and that lately a "fuck you" stare at men in general was very much in order. I'm talking about YOU, John McCain and that clot behind your eye that you're dealing with by using the "best healthcare system in the world" that we provide for you, and YOU, Mitch McConnell and your bullshit healthcare bill that you've deferred yet again. The weight I carry, though, is far less than others' in this world, and I'm not talking poundage. I'm thinking we should all join together, find a good ambulance-chaser attorney and file suit for emotional distress related to the healthcare shenanigans in our congress.

This morning, I spent the better part of two hours on the phone using my tiny little mother mind™ to navigate the various Systems of Care. That's a euphemistic phrase for The Neurologist's Office, The MediCal, The Blue Shield, the Social Security Administration, and the Wheelchair Company. With the exception of a successful refill for The Drug That Doesn't Work But That Sophie Is Horribly Addicted To, the rest of the calls were unproductive fools' errands. I've been throwing around the term fool's errand a lot lately. It captures quite perfectly what dealing with the Systems of Care is like on some days. Most days. I won't regale you with details because I'd feel responsible if you felt violent as a result, and I don't have a way to dispense Tootsie Roll pops to mitigate any damages.

Today, I found myself unwrapping a Tootsie Roll pop and sucking it furiously while on hold. About when the insurance company's Automaton/human came on, I'd gotten to the sticky tootsie roll part and enthusiastically crunched the candy into the chocolate while dictating social security numbers and case numbers and weight and marital status and my feelings about John McCain's eye clot.* Just kidding on the last three. See below for thoughts on the last. Where I ended up after said conversations was Brazil,** where I was given a list of different numbers to call for seemingly intractable problems and issues. I placed those numbers in a little pile on the hot pink plastic file bin on the top of my desk, right under the Shrine of Doodads and Tchotchkes. 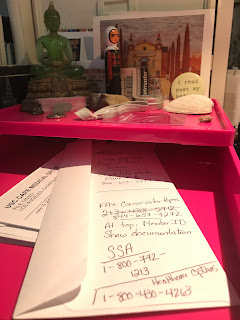 The Tootsie Roll pop helped which probably means I have some kind of oral fixation issues.

Actually, it helps to curb invective so I can work on my "fuck you stare."

What also helps is to surrender and call it a day even though it's before noon.

What are ya'll doing today?


* I know I'm not alone in remarking on the irony of the estimable Senator McCain who suffers from a clot above his eye and who is currently getting excellent (The Greatest Healthcare System on the Planet) healthcare, gratis (thanks to his bosses, US), which has pushed the "healthcare" vote off yet again (because his vote is said to be a resounding YES). Imagine my "fuck you stare" here.

** I can still conjure the feeling I had after seeing the movie Brazil, not only because my tiny little mother mind™ has a memory like a steel trap, but because the events of my life mimic them nearly every day. 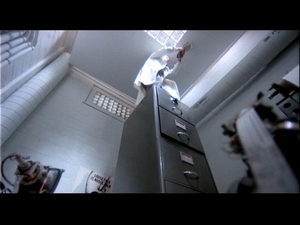