There's Everyone and Then There's Us*


The last time I posted the photo above was many years ago, and it was basically yet another post where I rhapsodized about my general bookworminess. However, such was the confusion around the photo and the object in the upper left corner that I had to then post this one: 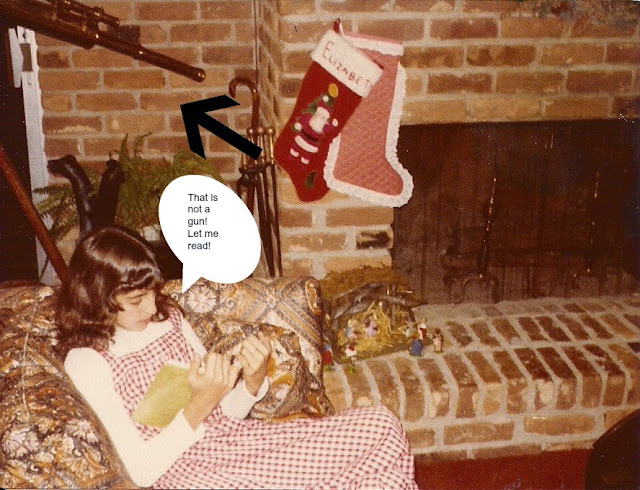 The title of the second post that accompanied the second picture was "Let's Talk About the Gun," and as of this moment, it's been read 31,907 times and is the fifth most "hit" post on my blog. Counting this one, I have 4,103 published posts and more than 4,000,000 "hits" in total. It's all about "the gun," you know, which is actually not a gun but a telescope, a big ugly brass and veneered wood one that sat in my family's den in a Tudor house on a large wooded lot in a subdivision in suburban Atlanta in the early seventies. I'm not sure what there was to see out the back sliding glass door that slid open onto a wooden deck that hung over a grassy yard and woods, but I'm not sure either why my hair looked like that, why I wore a red-checked maxi jumper or why I was so thin then yet so ample today,  and god, why can't I read like that now, so immersed and lost? I'm even more unsure why so many people search for "let's talk about the gun," or "talk, gun" or just plain "gun." Then again, the most hit post of mine is about paper cranes with more than 75,000 hits so I guess you could also say that more people look up paper cranes than they do guns.

The telescope is meaningful for me today both because we're all getting ready for The Great Eclipse, and because I learned that there are hundreds of armed militias everywhere in these Disunited States of Amerikkka who are prepared or plotting to take back their country from brown folk and those who enable them. Are you catching my drift? Drift. Yes, I can drift. Even though southern California isn't on the path to see the moon completely eclipse the sun, it's going to happen, and there's something going on in the atmosphere in general that's causing a ruckus in the brains of the sensitive. Sophie's had an unusual number of large tonic seizures over the past week or so, but she recovers from them quite quickly and has none of the co-morbidities that we generally see during other seizure clusterfuck times. I realize that Science has found no correlation between seizures and moon cycles, nor is there established causation, but we in the epilepsy community -- the refractory epilepsy community -- those of us with the tiny little mother minds™ know very well that something goes on with the moon and the brain. I've heard of four children in my community who've died over the last week. That I can type that sentence out amidst all this seemingly idle chatter is the reason why I'm writing this post. Sophie is particularly alert in between these seizures with a penetrating eye gaze and smiles, seemingly sharpened, perhaps tensed, maybe even waiting. Aren't we all though, these days? Waiting? Not just for the eclipse but for what else and what more as we watch our country diminished by louts,  our heads whiplashed, events waxing and waning (like the moon) willy nilly with just about everybody at everybody's throats. I, personally, feel muzzled by Identity Politics (the Tina Fey backlash, for one), and am both earnest and defiant. I feel like I'm dancing on the ridge with the carnies and Death in a Bergman movie,  could perhaps be walking toward Guido in 8 1/2, one of his women, perhaps in a dream or the woman in Beckett's Happy Days, buried up to her waist in sand yet cheerful and getting on with it. Children are dying and Sophie is seizing, the moon will blot out the sun for some but not all, we are to be serious with intent, but (thank you, Chris), isn't life a cabaret and all that? Love is the answer but what if you live the questions?


Is that a gun or a telescope?

*The working title of my book in progress