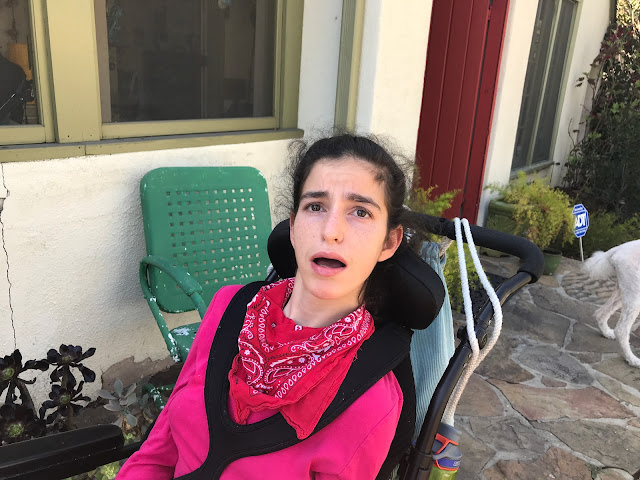 Sophie will be 23 years old tomorrow, March 8th. Everyone says, I can't believe it! or they say, My God, how time flies! It's hard to believe that she's 23 years old! Sophie would if she could and I will tell you that it's not hard for us to believe that she's 23 years old, that we feel every second of those 23 years, that they have not flown by even for one moment, that she was a tiny baby and I her 31-year old mother in another lifetime, eons and eons ago.

We are filled up with 23 years, exhausted and exhilarated and indomitable.

Richard Engel, the chief foreign correspondent of NBC News has a very young son with Rett Syndrome. Rett is one of the many disorders that we ruled out as a diagnosis for Sophie, back in the early days when the powers that be had discovered a gene marker for it. Sophie tested negative for that particular mutation even as she had many of the clinical characteristics of Rett Syndrome. Since those days, they have found other mutations related to Rett Syndrome, but I admit to being lazy about testing Sophie for them. It has something to do with my ambivalence about the medical community, about what it means to fix and to cure. That's a post for another day.

Mr. Engel has written a beautiful piece about his experience fathering this special child and persuasively argues that his experience as a war correspondent and knowledge of PTSD parallels that of this new parenting journey. You can read it here.

On the eve of Sophie's 23rd birthday, I confess to reading the article with a bit of an eye roll -- well, not exactly an eye roll but more a sigh. I imagine that fellow veterans (war imagery always irritates me, but it's appropriate here) will understand. What struck me, on the eve of Sophie's 23rd birthday, is how innocent and heart-ripping Mr. Engel's yearnings and aspirations are and how dim his understanding of the journey ahead. That is as it should be. I don't mean just the trials and struggles, the cycles of grief and loss and anger and acceptance but rather the knowledge that comes from those cycles, and that contrary to what the psychologists tell you, they repeat themselves over and over and over. Despite the beauty of his prose and the exquisite sensitivity and vulnerability he reveals, he has no idea that he might one day, like we veterans, realize that his love for his son has absolutely nothing to do with curing him.
Posted by Elizabeth at 5:15 PM