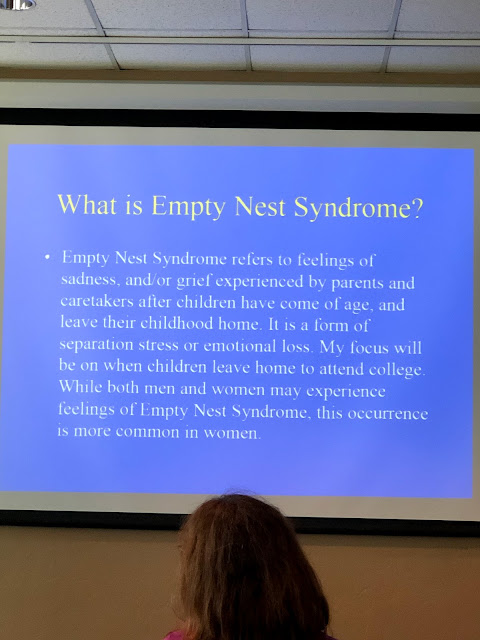 Yesterday I went to a seminar titled "Empty Nest Syndrome" and learned approximately nothing, but it felt good to sit in a big room with a bunch of goofy parents steeling ourselves for the big good-bye. I don't need anyone telling me that it's all good and right and the way things are supposed to go. I know all that. I haven't fully processed or articulated what it's like to really never have an "empty nest" in the narrowest definition of the term, given my life as a primary caregiver to my beloved Sophie. Life goes on in a sort of eternal present for me and Sophie, even as my sons move forward, and I don't mean this in a bad or heavy kind of way. I will try at some point to write about it, to parse out the peculiarity of maintaining a nest even as my own impulse is to fly away to a new part of life. As they say. I texted a fellow caregiver during the seminar that I was going to drop a bomb on the person leading it by asking whether taking up a new hobby or planning a trip would help the "Never an Empty Nest Syndrome," and my friend texted back, Do it, and I smiled and looked up and let my mind drift to all the years, all the years. I am so damn proud of Oliver, of all he's accomplished and the young man he's become. I'm sad in an existential way that my job raising him is largely over even as I know in my bones that mothering is so deeply embedded, I might as well be one of those orca matriarchs whose sons never leave her. I'm going to tell you a story about something he said the other day in response to us witnessing a terrible motorcycle accident on our drive from Los Angeles to Tucson. Oliver was driving, and I was reading when he yelled out and grabbed me and I looked up to see a guy flipping over and over and a bike in the air and the guy rolling on the road and then we were past and pulled over and I was calling 911 and then Oliver pulled back out on the highway and we were on our way our hearts pumping and both of us exclaiming and repeating over and over what we'd seen and that terrible rush in the body for many minutes before we quieted. You know what's really weird, Mom? Oliver asked, and I said, What? and Oliver said, I noticed that guy a while back on his bike and he had a flag or something on his jacket and I thought he was probably a stupid Trump supporter or gun guy or just an asshole on a bike, but when he went flying through the air,  I saw his shirt go up his back and it was ripped up, his back was all red and I felt bad for him and then I thought that everything in the world is going to be okay because of that, that we feel bad for and care about people, about life. It's about love and that kind of thing. 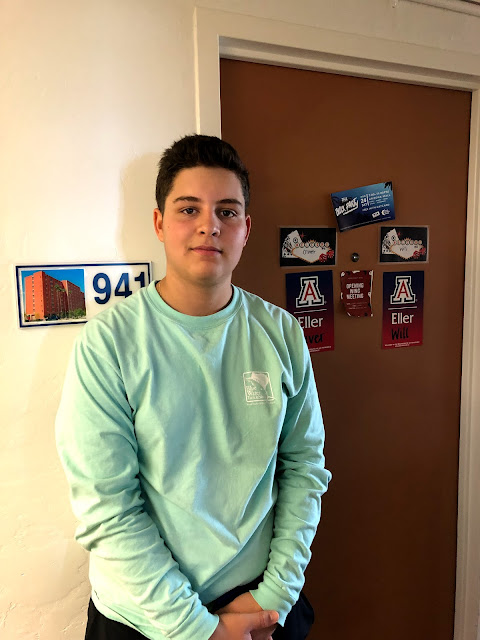 P.S. Lest you believe my son to have reached some lofty place of magnanimity and compassion, led there by a mother more bodhisattva than human, I'll confess that we decided we wouldn't feel the same way if it'd been Dear Leader who'd been on that motorcycle.

Posted by Elizabeth at 8:06 AM