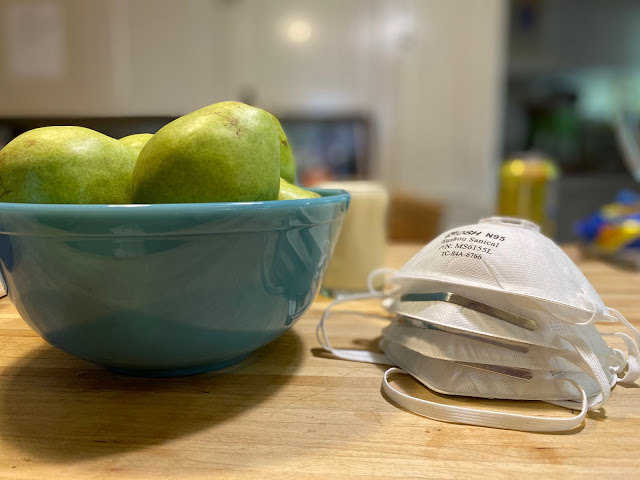 Hey there, from sunny California! How are ya'll doing?

A couple of years ago -- or was it last? -- I read an article about the best masks to wear should the fires in California grow worse and our already full of particulate air get even worse, and I bought a box of those N95s right on Amazon. I balked at buying them because they were more than $50,  but I'm good (or bad) about impulse shopping so when they came I put them in the earthquake kit and forgot about them. My friend Heather posted on Facebook about a news conference in front of UCLA with doctors and nurses pleading for masks -- for the people who had bought and hoarded them in the last few weeks to donate them to area hospitals. I called one of my neighbors whose husband is a doctor at one of the most prestigious hospitals in LA and told her that I had a box of N95s and would he like them and she said yes! and then she walked over to my house and rang the doorbell and I reached out with them to where she stood, 6 feet from my doorway. She said that her husband would be taking them to the ER. She said that the hospital is ghostly, that all elective surgeries have been cancelled and that several people were on respirators in intensive care and everybody else is waiting.

We are all waiting.


My uncle has tested positive for The Virus. He is nearly 84 and lives in an assisted living/retirement home here in Los Angeles. He has no symptoms but is quarantined in his room.


I've always felt contempt toward the survivalist -- especially the rich ones who live behind barricades and have safe rooms or private jets or extra cars parked across bridges from Manhattan in case terror strikes again. People are making masks out of scrap fabric all across America as we speak.

I've thought it, but I've never written it: may that POS who is supposedly leading us drown in fluids filling his lungs, alone.


Cassandra
screamed
and
yelled
and
moaned
and
wailed.
imprecations
warnings
no
one
believed
her
comma
But

Here's one of my favorite poems by Jack Gilbert.

A Brief For The Defense

Posted by Elizabeth at 4:28 PM