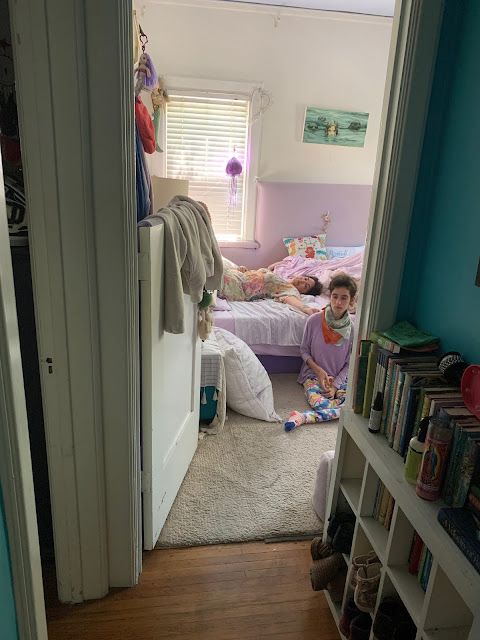 How's Sophie, he texts.
Fine
Then,
nothing.

A nasty toxic red tide we see during the day on the beach in southern California turns into a glowing blue -- what? Phosphorescence. Some people call it magical. I'm transfixed less by the blue emanating from dolphins and water in moonlight than the transformation itself. The smell of decay masked by light. It doesn't seem possible so I guess, magic.


How's Sophie, he texts.
She's running a fever. No other symptoms. I will talk to the doctor tomorrow.
Then,
nothing.


People on cell phones bore me. The people I can't see and the people I can see. The head low like a horse without the velvet nose. I'd like to see some teeth, the huge yellow ones biting an apple.

Phosphorescence is light emitted after exposure to radiation.
It's produced by something that doesn't flame or heat.

(BTW, Sophie had a fever last week for three days with no other symptoms. She also stopped having seizures which is always the case for her. I wondered if she had The Virus. I wondered whether she'd die, but I wonder (this) (whether she'll die) every single day. The parenthetical. My powers of dissociation are strong. I had my first tele-health meeting with The New Physician. She took up 1/2 of the rectangle that is my phone screen. She wore a white lab coat and stood in front of an examining table with a blood pressure machine on the wall behind her. I wondered if it were a backdrop, one of those screens you can put up behind you while you Zoom. My students do that. One of them has the Tiger King guy behind him, the stripes playing light across his face. Wavy. We're reading The Crucible. The student can't believe I refuse to watch Tiger King. Why not? he asks.  Why? I say. What's a crucible? he asks. A container that holds high temperatures, metals melting. The doctor says, I wouldn't test her because it's so uncomfortable. I imagine driving in a line of cars into Dodger Stadium with Sophie in the back of the car in her wheelchair. Would someone open the door and have to swab her? I read somewhere the nasal swab felt like it touched my brain.
)

I'm outside today picking mint from the garden. I rip it up take a huge bunch inside and wash it in the sink. The apple tree has blossoms and every succulent has a bloom. The sky is blue and a velvet hummingbird sideswipes my nose, I hear it coming. Hear it here.